‘Until I Find You’ by Anna Smith 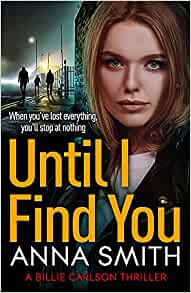 Former police officer Billie Carlson has set up as a Private Investigator. Her work consists mainly of spying on cheating spouses and finding missing persons, A far cry from her work as a cop.  But one morning things change when a distraught and clearly disturbed young woman comes onto her office. It takes time before she is calm enough to tell Billie that her baby has been stolen and that she wants Billie to find her.

When she identifies herself as Jackie Foster, Billie recalls the case, which died a quick death when Jackie told the police that she had no baby. Taxed by Billie to explain why she said that Jackie says that she had to say that to stay alive. Although originally sceptical of her story, Billie knows first-hand what it is like to lose someone, and so unbelievable as her story sounds Billie decides to help her.

I loved all the Rosie Gilmore books and already I am already captivated by Billie Carlson. When Billie starts putting feelers out, things happen quickly. Luckily, she has retained contacts in the Glasgow police force and is able to ascertain some information to help her, but there are very bad people who do not want her to find baby Foster. And they will do anything to ensure that she doesn’t. There is a lot of killing and Billie is in no doubt that she is top of their list.

Interestingly, help comes from an unexpected quarter, that may develop in later books.

Utterly gripping, this story moves along at a cracking pace. It is an incredible read. I could not put it down. Highly recommended.
-------
Reviewer: Lizzie Sirett 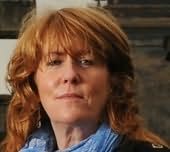 Anna Smith has been a journalist for over twenty years and is a former chief reporter for the Daily Record. She has covered wars across the world as well as major investigations and news stories. she decided to put her experiences to good use. And so, the series of Rosie Gilmour novels were born, featuring a Glasgow journalist trying to tear down the world of corruption and injustice.  Her debut novel was The Dead Won't Sleep, There are nine books in the series. Her most recent series features Billie Carlson, former police officer now a working as a PI. The first book in the series is Until I find You. Anna lives in Scotland.