‘The Killer in the Snow’ by Alex Pine 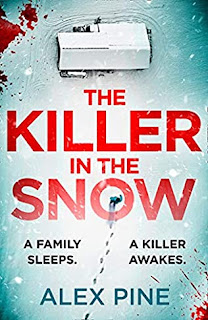 It’s Christmas Eve and things are not going well for Robert Bateman. Oaktree Farm had been home to him and his wife Mary, and their daughter Charlotte for two decades, but he is aware his only option now is to sell the farm. Even that won’t get them totally out of debt. To top it all, he had that day received a threatening text. With heavy heart he makes his way home. Arriving at the farm he sees a set of footprints in the pristine snow heading towards the side of the house that descends to the cellar. The cellar is always kept locked, but strangely there are no returning prints. A scream from inside the house has him rushing to his front door.

DI James Walker is pleased that Christmas has passed without incident, unlike the previous year, when a serial killer stalked Kirkby Abbey in the Lake District where he had moved to from the Met to escape gangster Andrew Sullivan who blames him for sending him to prison and has vowed to kill him in revenge.

Then a call comes in from a farm some miles south of Kirkby Abbey that there are three dead bodies at Oaktree Farm. The caller described it as a bloodbath.

Initially, it looks to James to be a murder suicide, but something doesn’t look right. Delving into the lives of the Batemans, it becomes clear that they had financial problems which had been exacerbated by Robert’s gambling. Did Robert kill his wife and daughter and then himself. But the forensics don’t support this. So, was there someone else there?   Evidence that Charlottes had fallen out with her boyfriend comes to light, and her boyfriend is missing.

While interviewing possible suspects, including the writer of the threatening text found on Robert’s phone, James learns that a similar crime occurred at Oakham Farm twenty years ago.  As James continues his investigation, he suspects that he may have to solve the old crime before he can solve the current one.

Cleverly plotted, this is a brilliant and intriguing mystery. It gripped me from start to finish, I couldn’t put it down.  Highly recommended.
------
Reviewer: Lizzie Sirett

Alex Pine is the pseudonym of a bestselling author who has also written books under the names Jaime Raven, James Raven and JP Carter. He was born and raised on a council estate in South London and left school at sixteen. Before becoming a full-time writer, he spent a career in journalism as a newspaper reporter and television producer. He was, for a number of years, director of a major UK news division and co-owned a TV production company. He now splits his time between homes in Hampshire and Spain with his wife.