‘It’s All About Teddy’ by Lee Darkin-Miller 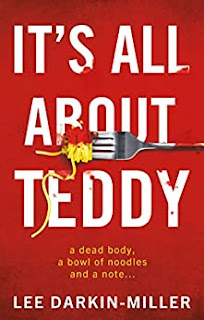 The hapless, First Person narrator of the story is unnamed until he is given the nickname T.C. after a spirited rendition of the television theme song from Top Cat. The story opens with T.C. seated in a flat, watching television, eating egg noodles and popping pills that he describes as ‘extra body nutrients’, prescribed by his doctor for his bad back, although it is immediately evident that the pills are something far more mood enhancing and addictive than vitamins. While sitting there, T.C. ponders the mysterious disappearance of the body that had been lying on the floor of the flat for the last two days. The body is that of Teddy and it transpires that T.C. accidentally killed him using that most lethal of implements, a fork. A note pushed under the door is addressed to ‘Teddy’ but naturally T.C. reads it: it invites Teddy to a pub called The Broken Barnacle at nine that night, it also provides a code phrase.

T.C. keeps the appointment and uses the code and finds himself taking part in an orchestrated riot in which the vandalism is a cover for organised looting. T.C. finds himself partnered with what he at first thinks is a rather puny man but later discovers that he is accompanying a beautiful blonde girl called Anemone. When looting a jeweller’s shop turns dangerous, T.C. saves Anemone’s life, at great risk to his own, which, as far as Anemone is concerned, confirms his credentials as part of the group. He is invited to meet her the following evening at another pub and then he is asked to visit her at the place she lives, the lodge. T.C. is prevented from keeping this appointment because he is viciously beaten up soon after leaving Anemone, but that does not deter him from his self-appointed mission.

T.C. has one purpose behind all his actions, he is desperate to find and recover the person who is dearest to him, the girl he calls his ‘green-eyed angel.’ This quest leads him into a variety of squalid locations in company with some bizarre, foul-mouthed and potentially violent characters, until he falls foul of Dexter, one of the most dangerous criminals in town. One thing is certain, however great the peril, T.C. will not give up until his ‘green-eyed angel is restored to him.

It’s All About Teddy is the debut novel by this author. It is an unusual novel, filled with off-beat action, zany humour, set in some remarkably sordid situations, with characters who use some inventive and potentially offensive language. T.C. is not an initially engaging protagonist but he becomes more likeable as the story progresses and, by the end of the book, the reader is on his side and wishes him to succeed in finding his ‘green-eyed angel’.

It’s All About Teddy is an enjoyable read for anyone who likes unusual characters and dark humour set within a complex and unpredictable plot.
------
Reviewer:  Carol Westron

Lee Darkin-Miller is published writer, an award-winning composer and multi-instrumentalist whose work appears in film, TV & video games. His personal musical projects can be found on all major streaming platforms & online stores. ‘It’s All About Teddy’ is Lee’s debut novel, but he has also had some short fiction published too. A historical comic novel is currently in the works. For more information, please visit: www.leedarkinmiller.co.uk --This text refers to the paperback edition.