‘A Good Day To Die’ by Amen Alonge 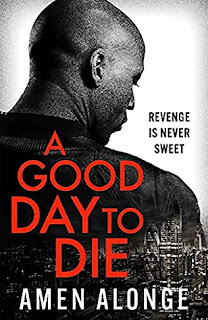 Ten years ago a young black man we only know as “Pretty Boy”, an expert in valuing jewellery (and stealing it) had to leave the London scene. It has played on his mind ever since and he is now determined to return and take revenge on the person responsible for his inevitable exit.

We learn slowly that the man involved became jealous of Pretty Boy and became a grass.

As the story progresses, at one point we are told a little of Pretty Boy’s childhood. It makes harrowing reading – his mother was a prostitute run by her pimp who was also her boyfriend and supplied her with the drugs he kept her on. He was also violent. Pretty Boy had to fend for himself which then led him to a life of crime.

From time to time we go back and learn about the events ten years ago when he was nineteen. Laid bare are the facts about drug dealing and prostitution and the lengths the people involved will go to, to keep ahead of rivals.

As we follow Pretty Boy’s dangerous path towards revenge it becomes apparent that he cannot achieve it without more than one person being “disposed of”. Things take an even more violent turn when he is given a bracelet worth a fortune, in part payment of a job.

Unknown to him, it was stolen from the wife of a Michael Downing, a really nasty character, now a counsellor. He will stop at nothing to get the bracelet back. Now Pretty Boy himself is being hunted down, causing more deaths in the criminal world. Will he be one of them?

Oh! my goodness, how is it possible for a story so full of extreme murder and mayhem to be written in such a way that it is full of humour? It could be that the characters “disposed of” are all of the violent criminal fraternity, sort of a rough justice!  Once I became used to the excessive use of crude, very strong language, I really enjoyed this book, much to my surprise.

Amen Alonge was born in Lagos and moved to London as a teenager almost twenty years ago. Since then, he says he has enjoyed so many wonderful life experiences that have led me to this moment. ‘I'm an author, a lawyer, a husband, and a father... and I love every moment’.