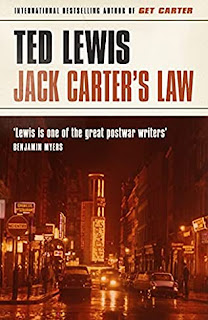 Jack’s Return Home… Ring any bells?  It’s a book, first published in 1970. So, you may be forgiven for having no recollection of the work. Try this… Written by Ted Lewis. No?... A character called Jack Carter. Any closer?...

Alright, here it is… He’s the mobster, played by Michael Caine with something close to supernatural brilliance, in the film still consistently voted as the best British crime thriller ever made.

Filmed in 1971, Get Carter was a ground breaking moment in contemporary cinema. The book was instantly re-named and re-published in its legendary two-word title.

In essence, Ted Lewis had the literary world at his feet. His books revered and sensationally reviewed world-wide. He returned to his famous character in 1974, with Jack Carter’s Law, hailed as the founder of ‘British Noir’. And genuinely deserving of the title.

Noir is a hugely over-worked word.  Too often doled out.  A book with a maverick hero, a chunk of dark atmosphere and a hefty dose of violence, is given the noir label.

There’s a shine on the noir myth, which does not translate to crime thrillers automatically. But it’s embedded deep in the extraordinary work of Ted Lewis.

The late Derek Raymond (no mean exponent of the genre himself) says of Lewis… “An example of how dangerous writing can really be, when it is done properly. By looking the street straight in the face instead of peeing at it from behind an upstairs curtain.”

Ted Lewis was brought up in Lincolnshire. After leaving Hull Art School he moved to London in 1962 and plunged into all the excitement and hedonism the capital had to offer. He worked in advertising and TV commercials, wrote for Z Cars, crewed on low-budget British films. Spent hours in Soho drinking clubs and gangland haunts.

Jack Carter’s Law is shot through with that experience. A ‘prequel’, written in 1974, three years after the success of Get Carter – set in claustrophobic streets, low dives, smoky billiard halls, gentlemen’s clubs, grimy apartments, the posh houses of expensive gang leaders.

It’s London, in the late 1960s. Jack Carter is the top man in a crime syndicate headed by two brothers, Gerald and Les Fletcher.  He is sleeping with Gerald’s wife, but that doesn’t concern him at all. In fact, he and Audrey have a plan to run away together with as much of the brothers’ money they can take along. His problem is an informant. A grass. One of his own men.

That is what is losing him sleep. And if he doesn’t deal with the problem, the consequences could be fatal, He sets out to hunt him down.

Jack Carter’s Law is a merciless novel, featuring the total Jack Carter experience. The characters have no moral centre, and Lewis pulls no punches. His stripped to the bone prose, written in the first person and in the present tense, makes the narrative relentlessly personal. A brilliant way to convey just how much this mission means to Carter. We are inside his head all the way through. Criminal psychopaths, bent coppers, unbending evil and naked violence notwithstanding, this is a journey to the bitter end.

In the mid-1970s, Ted Lewis was up against it personally. Unable to repeat the early Carter success, a ruined marriage and heavy drinking was taking its toll. He died 8 years later at the age of 42.

No Exit Press is now re-issuing the Lewis back catalogue, along with Getting Carter – Nick Triplow’s tremendous biography of the author. I’ll leave the last words to him…

“Ted Lewis made his own rules and dared you to look away.”
------
Reviewer: Jeff Dowson

Jeff Dowson began his career working in the theatre as an actor and a director. He moved into television as a writer/producer/director. Screen credits include arts series, entertainment features, documentaries, drama series and TV films. Turning crime novelist in 2014, he introduced Bristol private eye Jack Shepherd in Closing the Distance. The series developed with Changing the Odds, Cloning the Hate and Bending the Rules. The Ed Grover series, featuring an American GI in Bristol during the years following World War 2, opened with One Fight At A Time. The second book New Friends Old Enemies was published in May 2021. Jeff is a member of BAFTA, Mystery People and the Crime Writers Association.