‘The Suspects’ by Jodie Lawrance 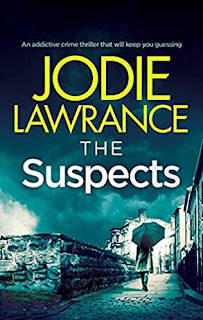 The Suspects is book 3 in a series set in the 1970s about Detective Helen Carter.

Eight years ago, Jimmy Osborne pulled off a heist in a jeweller’s and killed a cop. He has been hiding low in Spain since. Now he’s back in Edinburgh. DC Loughton (partner of the killed cop) wants to know why, and he wants him caught. Acting Detective Sergeant Helen Carter is brought in to help investigate and she’s also dealing with a young man found shot in an alley.

This is a more gentle police procedural with nostalgic nods to the 1970s and has the feel of a 1980s TV soap like The Gentle Touch or Juliet Bravo. Helen Carter is the token woman in a man’s world, standing up to prejudices from her male colleagues who are all out of the same mould. The story flows between various character viewpoints and the individual issues they are dealing with at home and on the force, as well as trying to investigate a crime and bring a fugitive to justice.

Most series book work as standalone stories but for me it seemed short on the character development probably established in the previous two books. It is recommended that readers start with book 1.
--------
Reviewer: Christine Hammacott

Christine Hammacott  lives near Southampton and runs her own design consultancy. She started her career working in publishing as a book designer and now creates covers for indie-authors. She writes page-turning fiction that deals with the psychological effects of crime. To read a review of her debut novel
The Taste of Ash click on the title.
website: www.christinehammacott.com
twitter: /ChrisHammacott
Facebook: /christinehammacott.author
Posted by Lizzie at 13:51