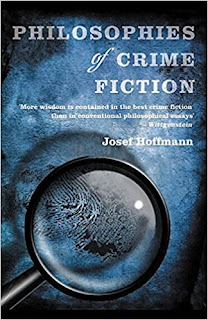 This is an attempt to investigate the philosophical ideas found in crime fiction by an author with academic credentials (Emeritus professor of Social Law at the University of Applied Sciences at Frankfurt am Main) and great enthusiasm for crime fiction.    He takes 2 premises initially - the analysis of the influence of philosophy on writers of crime fiction and their oeuvre - and - how crime fiction may have influenced philosophers and their writings.  As he points out the sheer volume of crime fiction and of philosophical works is so great that no-one could read all of them!  He has, therefore restricted himself to classics of the crime genre and put his emphasis on the crime fiction rather than philosophy.  Hoffman looks at the philosophical ideas found in crime writing by famous writers such as Conan Doyle, Dashiel Hammett, Agatha Christie and Raymond Chandler.  He considers other writers too - Philip Kerr’s A Philosophical Investigation is one example.  In fact the book really is a collection of essays on this theme in crime fiction.

Let’s look at one essay - that on ‘The Rational World of Sherlock Holmes’.   Hoffman enjoys the use of deduction by Sherlock but points out that the 217 (approximately) deductions in the 60 crime stories of the Holmes canon do not always fulfil the criteria of logical deduction and that the validity of hypotheses are tested in only in about 28 cases.  Hoffman reminds us of that Doyle himself cited Dr. Joseph Bell as the role model for Holmes’s type of deductive reasoning.  He mentions T.H. Huxley and John Stuart Mill as other influences on Doyle.   He quotes Holmes as admitting that it is only the uniformity of natural phenomena that enable him to analyse, conclude and predict realistically.  He follows Holmes’s ideas through a number of the stories and concludes that  Watson is vital to these tales because he defends human emotion and common sense against Sherlock’s ascetic logic.

To take an essay from the other aspect, Wittgenstein is one philosopher who is cited as a reader of crime fiction.  He was apparently particularly fond of American works of his period.   He, in the early 1930s, refers to crime fiction sometimes seriously sometimes trivially - in a lecture from 1932-3 he spoke of a gentleman always wearing a brown suit (reference to the Agatha Christie book of a similar title?) but Wittgenstein also saw himself exposing deception by fellow philosophers in the same way as a detective approaches the solving of problems.

The final chapter here is entitled ‘the Consolation of Crime Fiction is Stronger than the Consolation of Philosophy’ and , for Hoffman, Boethius’s views are of great interest but he certainly finds crime fiction offers more consolations!   There are some extremely interesting ideas in this book, and I think that any avid reader of the classics of crime fiction would enjoy the chance to look at some famous authors from a different perspective. ------------
Reviewer: Jennifer S. Palmer

Josef Hoffmann was Emeritus Professor of Social Law at the University of Applied Sciences Frankfurt am Main, Germany. He published books on social justice for children and on the human right to enjoy the arts. A lifelong devotee of crime fiction, he wrote numerous articles for magazines and blogs on the subject. Sadly Professor Hoffmann passed away in 2015.