'The Good Neighbours' by Nina Allan 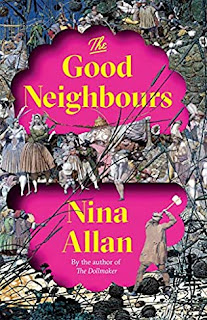 This is a story which weaves the imagined and the real involving the main character Cath - an aspiring photographer with a visual impairment working in a record shop in Glasgow.  She is drawn back to the Isle of Bute where she grew up to focus on a project involving photographing murder houses.  The story is infused with the memory of her close childhood friend Shirley who was murdered on the Island along with her mother and younger brother.

When Cath visits her friend's old home she finds the new occupier, Alice, and is immediately attracted to this married woman who is recovering from a mental health crisis.  They both set about discovering what they can about the murders which took place 20 years previously at Alice's home - Craigie House.  This exploration takes them to visit local people who remember the family together with confronting strange myths which link the suspected murderer - John Craigie - Shirley's father - with fairy folk lore and links with the 19th Century artist Richard Dadd who died in a mental institution after murdering his father.

The story is a mixture of straight forward murder detection and fantasy folk horror.  Cath's life has clearly been derailed by the murders when she and Shirley were 15. and the narrative explores issues of obsession, false memory and attempts to find a resolution both to the murder enquiry and Cath's own peace of mind.  A strange and absorbing read.
------
Reviewer: Toni Russell

Nina Allan is a novelist and critic. Her first novel The Race won the Grand Prix de L'imaginaire and was a Kitschies finalist. Her second novel The Rift won the British Science Fiction Award, the Kitschies Red Tentacle and was a finalist for the John W. Campbell Memorial Award. Her short fiction has previously been shortlisted for the Hugo Award, the Shirley Jackson Award and the British Fantasy Award. Her most recent novel is The Dollmaker. Born in London, Nina Allan lives and works in the west of Scotland.

Toni Russell is a retired teacher who has lived in London all her life and loves the City.  She says, ‘I enjoy museums, galleries and the theatre but probably my favourite pastime is reading.  I found myself reading detective fiction almost for the first time during lockdown and have particularly enjoyed old fashioned detective fiction rather than the nordic noir variety.  I am a member of a book club at the local library and have previously attended literature classes at our local Adult Education Centre.'  Toni is married with three children and five grandchildren.