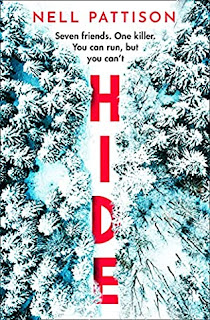 A group of nature lovers on a bird-watching expedition isn’t the first place you’d expect to find a killer. But Nell Pattison’s tense, slightly creep thriller charts the progress of no ordinary nature walk.

Seven friends have gathered on Boxing Day to visit a nature reserve and view the murmuration of starlings that happens at dusk – the remarkable gathering of thousands of birds in a graceful swooping dance across the sky. Lauren, the group organizer, is bossy almost to the point of abrasive. Emily, her sister, runs a successful business and is a city girl by inclination, but is trying to find some common ground between them. Morna believes she would be better than Lauren at organizing the group. Kai has an agenda of his own, but the nature reserve has captured his imagination. Ben is desperate to make Emily like him. And newcomer Dan is the quiet one, who no one knows much about.

And then there’s Alec, who claims to know everyone’s secrets and has a knack for rubbing people up the wrong way. It comes as no surprise that his is the murdered body which sets in motion a chain of events that no one expects. The killer must be one of the other six, and it turns out that each one of them bears some kind of grudge against Alec.

And as if the situation they find themselves in isn’t nail-biting enough, layers of tension build even further when darkness falls, and it starts to snow. Pattison knows how to create an atmospheric background and how to make it highly visual: the tangle of trees off the main footpaths; the treacherous marshland; strange noises and lights in the distance.

The already edgy relationships soon begin to fall apart as the secrets Alec knew are slowly revealed. But even though each character takes his or her turn at telling the story, all in the first person, the identity of the killer remains under wraps until right at the end. It came as a surprise to me, though the clues were there if only I’d picked them up.

The final twist is even more startling, though again the clues are there if you look closely. It all adds up to a gripping and unusual psychological chiller which made me very wary of bird-watchers. As the late, great Stephen Sondheim once put it, don’t go into the woods!
-------
Reviewer: Lynne Patrick

Nell Pattison.  After studying English at university, Nell Pattison became a teacher and specialised in Deaf education. She has been teaching in the Deaf community for 12 years in both England and Scotland, working with students who use BSL. Nell began losing her hearing in her twenties, but still refuses to wear her hearing aids. She lives in North Lincolnshire with her husband and child. The Silent House was her debut novel.