‘A Particular Eye for Villainy’ by Ann Granger. 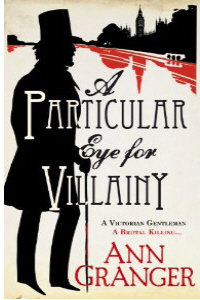 This is the fourth of Ann Granger’s novels set in Victorian London and featuring Inspector Ben Ross of the newly-formed Detective Section of Scotland Yard and his wife Lizzie. This time it is a neighbour who has been murdered: the elderly, harmless and seemingly impoverished Thomas Tapley. Ben’s superior, Inspector Dunn, is convinced that Thomas’s death occurred in the course of an unsuccessful burglary; Ben is not so sure especially when Thomas’s cousin, the eminent QC Jonathan Tapley, describes Thomas’s unhappy former life. Thomas had been a homosexual at a time when homosexuality was a capital offence. To preserve his family’s reputation, he had married and had a daughter, Flora, but on his wife’s death he had left England for countries with more liberal attitudes while Flora was brought up by Jonathan and his wife. Meanwhile Lizzie, accompanied by their maid Bessie, sets out on her own path of discovery and they establish that a private enquiry agent had been employed by a French woman with a somewhat sinister companion to trace Thomas.

What I particularly like about this series is the way in which Ben and Lizzie work so well together. One has a sense of real companionship. Lizzie herself is an excellent character: intelligent and spirited but not in an anachronistic way. And the period detail is full and authentic giving a true-to-life picture of in mid-Victorian London.
------
Reviewer: Radmila May

Ann Granger was born in Portsmouth where she was a pupil at the then Northern Grammar School for Girls and went from there to London University where she achieved a BA in Modern Languages (French with German). After a period spent first teaching English in France and then working in the Visa Section of British Embassies around the world. She met her husband, who was also working for the British Embassy, in Prague, and together they received postings to places as far apart as Munich and Lusaka. She is the author of the Mitchell and Markby Mysteries, the Fran Varady series. and more recently the Lizzie Martin mystery series. She lives in Bicester, near Oxford.

Radmila May was born in the U.S. but has lived in the U.K. since she was seven apart from seven years in The Hague. She read law at university but did not go into practice. Instead she worked for many years for a firm of law publishers and still does occasional work for them including taking part in a substantial revision and updating of her late husband’s legal practitioners’ work on Criminal Evidence published late 2015. She has also contributed short stories with a distinctly criminal flavour to two of the Oxford Stories anthologies published by Oxpens Press.