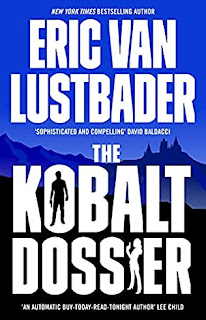 Evan Ryder works for a clandestine black-ops arm of the Department of Defence which is dedicated to protecting America and its people.  Well, she did work for them- she has recently returned to Washington DC, following her success in dealing with Nemesis (an international fascist syndicate) to discover that her division has been closed down and that her dead sister’s children are missing.  Ben Butler, her former boss, is bitter about losing his division and his job, but she must work with him as she tries to find the children and who is behind their kidnapping.

Her search leads Evan back to Nemesis territory –back to the cabal of mega-wealthy Americans with tremendous influence in national government who had supported Nemesis.  The more Evan and Ben investigate, the more plot lines appear, develop and entwine.  As they travel across the world in their search for the children, they encounter a variety of characters with a wide range of allegiances and employers, many of whom suffer unpleasant ends.  Evan has no idea what she is going to discover.

This is a deftly-plotted story – so many strands, so many aims, so many different and opposing desires, all twist and turn, twine and untwine.  This is an action-packed novel and the lurking danger and tension never let up, all leading to the final big twist, leaving the reader wanting to know what will be next for Evan.
------
Reviewer: Jo Hesslewood
Other books by this author:  The Nemesis Manifesto (the first book in the Evan Ryder series), the Jason Bourne novels, the Jack McClure novels and several other series and stand alones

Eric Van Lustbader was born in 1946 and raised in Greenwich Village. He is the author of more than twenty-five best-selling novels, including The Ninja, in which he introduced Nicholas Linnear, one of modern fiction's most beloved and enduring heroes. The Ninja was sold to 20th Century Fox, to be made into a major motion picture. His novels have been translated into over twenty languages.

Jo Hesslewood.  Crime fiction has been my favourite reading material since as a teenager I first spotted Agatha Christie on the library bookshelves.  For twenty-five years the commute to and from London provided plenty of reading time.  I am fortunate to live in Cambridge, where my local crime fiction book club, Crimecrackers, meets at Heffers Bookshop .  I enjoy attending crime fiction events and currently organise events for the Margery Allingham Society.
Posted by Lizzie at 20:37