‘Blood On The Cowley Road’ by Peter Tickler 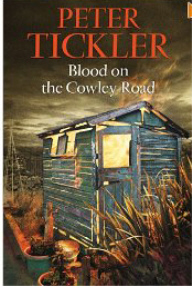 “I’ve lived in Oxford for many years, half of my life in fact,” Peter Tickler says. “And there’s a lot more to the place than pretty stone colleges and ancient libraries.”

It should be no surprise that Oxford is a city like any other. A place where you come across people who would not ordinarily surprise you, folks with jobs many others also do, streets and architecture not in the least extra-ordinary. It’s here on the Cowley Road and in nearby Iffley where Peter Tickler lays his scene. Oxford in effect is a major character in the story – like Edinburgh is to Rebus, Tyneside is to Vera Stanhope, Los Angeles is to Philip Marlowe. Oh, and there’s another formidable character in this book. Oxford United FC.

Okay… Let me begin by saying it’s a slow burner. You need to stick with it for a chapter or three, before enough unfolds to grab your attention thoroughly. Then the story makes you hang on. The synopsis of Blood on the Cowley Road is straightforward. An investigation into what looks like a suicide, morphs into a much more brutal something else.

DI Susan Holden is good at her job, but (let’s own up straight away) she is not the most affable of leaders. She has worked for a while with DS Fox but doesn’t like him very much. DC Wilson isn’t much higher on the regard scale either. In fact, we barely get to know their Christian names – which DI Holden never uses. PC Jan Lawson gets much closer to the ‘Guv’ and gets slightly better treatment.

Sarah Johnson, plunges to her death from the top floor of a multi-storey car park, landing near a homemade made plaque on the wall, placed there by Ed Bicknell, a student of street art and self-acclaimed photographer. Sarah had a history of mental ill health, so the possibility that she committed suicide is high on the cause-and-effect list. Then the body of Jake Arnold, a counsellor at the Evergreen Day Centre and the last person Sarah phoned before her death, turns up in the River Isis near Iffley Lock. This changes everything for the team.

A murder case it certainly is, in reference to Jake. And the list of suspects begins to mount – a fistful of the day centre regulars, including the director of the place; Sarah Johnson’s sister Anne; her head teacher boss (a married man with whom she is engaged in a relationship); the creepy street artist Bicknell; his art gallery patron Les Whiting (until recently in a relationship with Jake Arnold) and three died in the wool fans of Oxford United FC.

There comes a point in the investigation where, with so many suspects (each member of the team with his/her own favourite) and so many theories flying around, Holden and her team get mired in confusion. Locked into ‘ifs’ and ‘maybes’, the whole investigation becomes complicated and the atmosphere extremely murky.

Obsession and frustration abounds. Sarah Johnson ends up on the back burner after a second murder and then a third. Preconceptions and theories are thrown into disorder, straight forward detective work becomes nigh on impossible. DI Holden and the team are plunged into a race against time to find the killer (or killers) before everything spirals out of control.

Further story details here would come dangerously close to spoilers. I can only urge you to read the book for yourself. Mr Tickler will not disappoint you.
-------
Reviewer: Jeff Dowson

Peter Tickler has lived and worked in Oxford for nearly 30 years, and before that he was a university student, reading classics at Keble College.  Peter is a member of the Crime Writer's Association and Mystery People group.

Jeff Dowson began his career working in the theatre as an actor and a director. He moved into television as a writer/producer/director. Screen credits include arts series, entertainment features, documentaries, drama series and TV films. Turning crime novelist in 2014, he introduced Bristol private eye Jack Shepherd in Closing the Distance. The series developed with Changing the Odds, Cloning the Hate and Bending the Rules. The Ed Grover series, featuring an American GI in Bristol during the years following World War 2, opened with One Fight At A Time. The second book New Friends Old Enemies was published in May 2021. Jeff is a member of BAFTA and the Crime Writers Association.