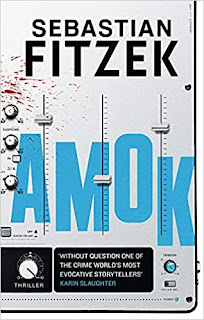 A Jan May walks into radio station 101 Point 5 in Berlin as part of a group invited to look over the station. Once in the studio he produces a gun and takes the others hostage. His demand though is rather unusual, he threatens to kill the hostages one by one until his fiancée Leoni is brought to him. She however was killed in a horrendous car crash eight months ago, but he refuses to believe this. Taking over the radio broadcast he announces he will ring at random a different person in Berlin every hour and if they don’t give the correct answer “I listen to 101 Point 5, now set a hostage free”, he will shoot one of them until he sees Leoni.

An ex criminal psychologist and expert in hostage situations Ira Samin, is brought in under duress. She had other plans for that day, she intended to commit suicide, all to do with the death of her daughter. Ira is loath to help, then something is revealed to her that compels her to change her mind.

A line is set up for her to talk directly to Jan. He is adamant Leoni did not die in the accident and that for some reason it is being covered up. She tries to negotiate with him but he ignores her and makes the first phone call. The horror then begins.

Ira is sure there is more to Leoni’s supposed death than she is led to believe, even the police commander seems to thwart her at every opportunity. Then it is revealed that Leoni’s father is connected to organised crime. Suddenly things get even more complicated when the chief prosecutor also seems to be up to no good. There is one unexpected disclosure after another. Even Ira has to face her traumatic past which leads her having to face a terrible upsetting truth.

Who can even be trusted anymore? This turns out to be more than just a hostage taking.

What a fascinating web of intrigue, another absorbing psychological thriller from Sebastian Fitzek. He really is a class act and I have no problem in highly recommending Amok.
------
Reviewer: Tricia Chappell