‘Bruno’s Challenge and other Dordogne Tales’ by Martin Walker 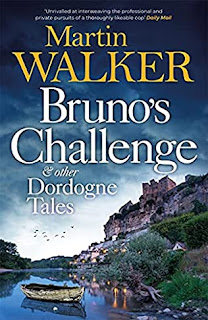 A new adventure for Bruno, chief of police in the village of St Denis in the glorious Dordogne, is always a pleasure. Lots of smaller adventures are gathered between the covers of Martin Walker’s latest foray into this amiable cop’s world, some of them crime stories, others explorations of everyday life in that world, but no less enthralling for that.

The usual suspects are all in evidence: the Monday night supper club of Bruno himself, Florence the teacher, Fabiola the doctor, Gilles her journalist partner, Jack the retired spy and his daughter Miranda, and Pamela the mad Englishwoman, who is actually Scottish, but the French don’t differentiate. Then there’s Ivan at the bistro, Fauquet the cafe owner, Stephane the cheesemaker, J-J Jalipeau the detective, Bruno’s boss the Mayor... the list goes on and on. And we mustn’t forget Isabelle, the love of our hero’s life, now enjoying a high-powered career in Paris but still drawn to her home in the Perigord.

Bruno is a policeman, so of course he solves crimes. In these tales he deals with revenge vandalism, a missing child, oyster poaching, and a handful of the kinds of local incidents and peccadilloes to which any smart cop turns a blind eye. He handles them all with his trademark common sense and diplomacy, and justice is served in the best possible way. There are also lunches and dinners, wine tasting (with an attempt to cheat, failed of course) and family dramas, well laced with recipes and glimpses into the kitchen, where Bruno is as comfortable as he is patrolling the Tuesday market and sampling its wares. There’s even a history lesson, when a wartime collaborator turns out to be not at all what people believed. The rest of the world would do well to follow the example set in this little piece of paradise.

Local customs and everyday life spring off the page, set against the beautiful Dordogne countryside in every season of the year. Every tale glows with Martin Walker’s love for his adopted home,  whetting the reader’s appetite not only for the area but also for more of Bruno’s adventures – fourteen full-length ones so far, with a fifteenth on the way.

For myself, I can hardly wait for it; this collection of tasters has only made me want more. If you haven’t visited St Denis and met Bruno and his friends yet, I urge you to do so, very soon.
------
Reviewer: Lynne Patrick

Martin Walker was educated at Balliol College, Oxford and Harvard. In twenty-five years with the Guardian, he served as Bureau Chief in Moscow and, in the US, as European Editor. In addition to his prize-winning journalism, he wrote and presented the BBC series Martin Walker’s Russia and Clintonomics.  Martin has written several acclaimed works of non-fiction, including The Cold War: A History. He lives in Washington and spends his summers in his house in the Dordogne. Many of his novels feature the old-school chief of police, Captain Bruno. The most recent being The Coldest Case. brunochiefofpolice.com