‘A Trick of the Light’ by Ali Carter 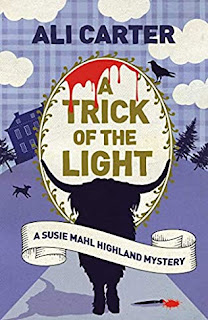 This is the third title in this series featuring Susie Mahl, oil painter, pet portraitist and amateur sleuth whose peripatetic life style enables her to visit various locales while exercising both her artistic proficiency and her detective skills. This time she is in a beautiful Palladian mansion, Auchten Laggan Tosh, in the Scottish Highlands where she has been employed for a week to tutor on a life drawing and landscape course an eclectic group of students. The castle belongs to Fergus, Earl of Muchton, and his wife Zoe. The students are a mixed bunch: middle-aged snobbish, Jane Atkinson, who never misses a chance to put anyone down, and her put-upon friend Felicity Jennings, brash Rupert Higbert, and, considerably younger, curvaceous Lianne Madaki and determinedly plebeian Shane Taylor, both students who have won sponsored places on the course, and Araminta (Minty) Froglan-Home-Mybridge and Giles Chesterton, also students. And also, a charming Frenchman Louis Bouchon to whom Susie is attracted despite (or perhaps because of) having been ditched by her previous lover, Dr Toby Cropper. As the students are conducted around the house, Susie can see that the house is shabby, and she guesses that one of the reasons for the Earl and Countess having the art course is to raise funds for its upkeep. But there are others attached to the house who also feature, the cook Mhairi Bannoch whose husband works on the estate as does the grumpy gamekeeper Stuart. And in a tumbledown cottage on the estate lives Fergus’s twin brother Ewen; it is only because he was the second to be born that it was Fergus who succeeded to the estate and not he, and as a result he is full of resentment.

However, for all the house’s dilapidated appearance and obvious poverty, there are treasures, particularly, fine paintings by the great Victorian artist Edwin Landseer.

Susie sets to work the next day and the students start on a number of tasks, all designed to challenge their artistic skills. As tutor Susie must concentrate on supervising and encouraging the students. However, one of the skills of being a portrait painter is the ability to draw a subject out so as to reveal his/her personality which in turn will be revealed by the painter’s skill. This is something that Susie enjoys doing (and is a useful asset for a sleuth). Right now, she feels that there is something going on under the surface and she is determined to find out what. Could there be a problem with some of the Landseer paintings? Are they all what they are meant to be? If she applies her painterly skills can she solve the problem – is there indeed a problem to be solved? And what should she do now that her former lover has suddenly made an appearance?

The writer’s depiction of the various techniques used in painting cleverly deflects the reader’s attention from the puzzle of the mysterious Landseer paintings while at the same time showing how a forgery may be detected. There is a lot more to painting than simply sticking a brush into a jar of paint and dabbing at a canvas in the hope that what results will vaguely resemble what the artist is looking at. And the absence of violence, let alone bloodshed, will reassure those who are looking for stories written in the recently revived ‘cosy’ form especially one with occasional comic touches like this one.
------
Reviewer: Radmila May 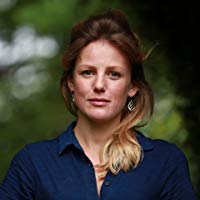 Ali Carter  was born in Scotland in 1983. She read art history at St Andrews, followed by an eclectic career before settling in for the long run as a fine artist. She specializes in oil paintings from life with an emphasis on colour. Writing, walking and cooking all accompany her painting. In 2016 Ali was commissioned to write a trilogy of murder mystery novels for Point Blank, the crime imprint of independent publisher Oneworld. The first, A Brush with Death (2018), and the second of these, The Colours of Murder, featuring amateur sleuth Susie Mahl. A Trick of the Light was published April 2021. Ali lives in East Sussex with her husband Sam.

Radmila May was born in the U.S. but has lived in the U.K. since she was seven apart from seven years in The Hague. She read law at university but did not go into practice. Instead she worked for many years for a firm of law publishers and still does occasional work for them including taking part in a substantial revision and updating of her late husband’s legal practitioners’ work on Criminal Evidence published late 2015. She has also contributed short stories with a distinctly criminal flavour to two of the Oxford Stories anthologies published by Oxpens Press – a third story is to be published shortly in another Oxford Stories anthology – and is now concentrating on her own writing.
Posted by Lizzie at 12:59