‘Who is Maud Dixon?’ By Alexandra Andrews 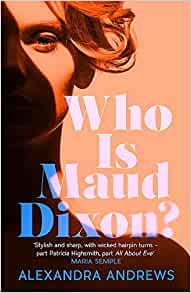 A young woman wakes in a hospital in Morocco. A doctor calls her by the name, Madame Wilcox – Helen Wilcox. Groggy with pain and drugs she nods. But she is not Helen Wilcox, she is Florence Darrow, and for the last few months she has been assistant and general dogsbody to the author Helen Wilcox who writes as Maud Dixon and, long ago, had published the famous novel Mississippi Foxtrot. But if she is not Helen Wilcox why is it only Helen Wilcox’s possessions in her handbag? And where is Helen Wilcox? Florence can’t remember what happened – apparently the car she was in, it seems as driver and sole occupant, went over a cliff and had it not been for a passing fisherman she would have drowned.

As a child, Florence has always wanted to be a writer despite her mother – single parent Vera – just wanting her daughter to be a successful businesswoman and then to get married. But Floronce left her native Florida and moved to New York and got a job as an editorial assistant, hoping this would ease the way into being published. But it has not and Florence, who had hoped to make useful contacts but is too shy and self-effacing to promote herself, is disappointed. Even a one-night stand with the editorial director turns out to be just that, and no more and Florence, in one of her very rare fits of temper, does something which results in her being fired.

But that isn’t the end of Florence’s hopes. She is contacted by Greta Frost, the agent of none other than the famous Maud Dixon, and offered a fabulous assignment: Maud (Helen Wilcox) is ultra-reclusive and needs someone around her to do the sort of donkeywork that we all have to do – answering run-of-the-mill emails, filing etc etc. What a fabulous opportunity to learn from one of America’s most famous writers. And being tucked away in Helen’s house in backwoods New York State will give Florence plenty of opportunity to get on with her own writing. She must not, however, tell anyone where she is or what she is doing – Helen’s privacy is all-important. That’s fine by Florence; she hasn’t made any real friends in New York; she is on bad terms with her mother. So, Florence settles in with Helen, and learns to get on with her employer despite the latter’s strange manner and occasionally acid tongue. And there is one thing Florence does learn: Helen doesn’t actually write very well. But she’s quite happy to let Florence re-interpret her ill-written and unreadable scrawls. All good practice for Florence’s own writing plans – when she can think of anything to write about.

Meanwhile, however, Helen is going to go to Morocco for research on her current work-in-progress and she wants to take Florence with her. Florence is all agog and finds Morocco fascinating and fun especially when she does take up with a group of young people who are somewhat into drink and drugs. But it is after a night with these new friends that the accident occurs, and she can’t remember anything of what happened. And there is no trace at all of Helen. Is she dead? And if so, since Florence can’t remember anything, was she responsible for Helen’s death? So, could she take over Helen’s persona as Maud Dixon? What could go wrong? Well, for one thing, Greta Frost turns up. She actually knows that Florence is not Helen Wilcox/Maud Dixon. And there’s news from the U.S. that a decomposing body has been found in a compost heap in Helen’s New York State home (luckily there’s no extradition treaty between the US and Morocco). And Florence has discovered a body in the swimming pool of the run-down villa in Morocco where Helen and Florence are staying. But is Helen dead? And if she’s not, then what? Could the whole thing – employing Florence, the trip to Morocco, the strict injunctions as to secrecy, bodies in the swimming pool of the run-down villa in Morocco where Helen and Florence have been staying - be a gigantic put-up job with Florence as the fall-guy?

So, what can Florence do to stay out of trouble? And can she achieve her ambition to become the next Maud Dixon? She’s going to have to keep a lot of balls in the air. And one thing’s for sure – no more Little Miss Nobody. This is a cleverly-written and amusing debut novel – recommended.
------
Reviewer: Radmila May 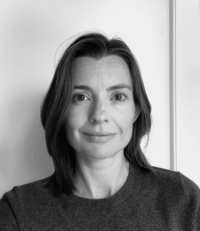 Alexandra Andrews is a journalist-turned-copywriter-turned-novelist, with a brief stint as a graphic designer. She has lived in New York City for her entire life, except for the year and a half spent in Paris writing Who Is Maud Dixon? She lives in New York with her family

Radmila May was born in the U.S. but has lived in the U.K. since she was seven apart from seven years in The Hague. She read law at university but did not go into practice. Instead she worked for many years for a firm of law publishers and still does occasional work for them including taking part in a substantial revision and updating of her late husband’s legal practitioners’ work on Criminal Evidence published late 2015. She has also contributed short stories with a distinctly criminal flavour to two of the Oxford Stories anthologies published by Oxpens Press – a third story is to be published shortly in another Oxford Stories anthology – and is now concentrating on her own writing.
Posted by Lizzie at 14:27