‘Spoils of the Dead’ by Dana Stabenow 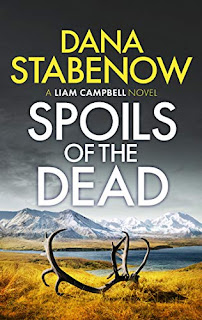 In this, the fifth novel in the Liam Campbell series by this author, Liam and his part Native Alaskan wife, Wyanet (Wy) Chouinard, have moved from Newenham where preceding episodes in the series were set. He is hoping for a quieter life, since he is not so far off retirement age, than previously. Wy has given up her air taxi business (the distances in Alaska are so great and the terrain so rugged that for all but the shortest journeys flying is the most practical option) but has retained both her own aircraft, believing that she will have a use for them as indeed she does in the course of this story.

Liam arrives in Blewestown on Labor Day when a demonstration is taking place which a counter-demonstration is doing its best to disrupt. He learns from a friendly barkeeper that these demonstrations are frequent, some supported by groups favouring liberal causes, others of a more conservative nature and the town is pretty well divided between the two. Liam is determined to stay out of any sort of possibly controversial involvement; so far as he is concerned he will lead a happy and quiet life in Blewestown with his beloved wife. He encounters some fairly eccentric characters, particularly former nightclub artiste Sybilla Carlsen, now in a care home and suffering from Alzheimer’s which leads her to occasionally parade naked through the streets of Blewestown while at other times displaying formidable intellectual acuity. Liam has one officer acting under him, young Sally Petroff, who is uptight to a degree, while the Chief of Police of a neighbouring district makes it plain to Liam that what happens in his district is no business of Liam’s; and the local judge, while friendly, stresses to Liam that she will not tolerate inappropriate behaviour by any police officer. Not that Liam would ever overstep the mark.

But life in Blewestown is not as quiet and uneventful as Liam and Wy had been hoping. Two young boys, exploring a cave in the cliffs overlooking a bay, discover bones which could be human, belonging to a child. And then a local archaeologist, Erik Berglund, is found dead in the same cave. Liam had liked Erik and had appreciated his interest in Alaska’s prehistoric inhabitants particularly a possible trail which could not just form a considerable tourist attraction but a Unesco World Heritage site. Not everyone in Blewestown is happy about this, particularly the glamorous Domenica Garland, president of a firm intent on exploiting Alaska’s mineral resources. Nor is another local archaeologist, Hilary Houten, rather older than Erik, who believes that discoveries made by Erik will invalidate his own theories as to the settlement of Alaska by its earliest inhabitants. Others like Erik’s nearest neighbour, Oscar-winning film star Gabe McGuire, are concerned that tourists traipsing along Erik’s planned trail will disrupt the peaceful atmosphere of his retreat.

In order to establish the truth about Erik’s death and the identity of the bones found by the two young boys Liam finds himself uncovering secrets of the past of some of Blewestown’s inhabitants which they would prefer to be left uncovered. And over everything towers the wild and mountainous Alaskan landscape, which, having been there myself albeit briefly, I can truthfully describe as literally awesome. Recommended.
------
Reviewer: Radmila May

Dana Stabenow  was born in Anchorage, Alaska on March 27, 1952, and raised on a 75-foot fish tender in the Gulf of Alaska. In 1964, the Great Alaskan Earthquake occurred during her twelfth birthday party. She survived the day. She graduated from Seldovia High School in 1969 and put herself through college working as an egg grader, bookkeeper and expediter for Whitney-Fidalgo Seafoods in Anchorage. She received a B.A. in journalism from the University of Alaska in 1973.  After a back packing trip Dana worked for Alyeska Pipeline at Galbraith Lake and later for British Petroleum at Prudhoe Bay. In 1982 she enrolled in UAA’s MFA program, from which she graduated in 1985. Her goal was to sell a book before she went broke and although she made it the book fell with an almighty thud on the marketplace and was never heard from again. In 1991 her editor sniffed out the existence of the first Kate Shugak mystery and offered her a three-book contract.