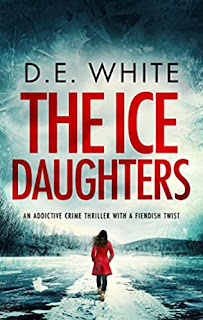 The Ice Daughters is a police procedural/thriller and the second book in the Detective Dove Milson series. Although it follows on from Glass Dolls, the book works as a standalone novel.

The horrific Nazi experiments conducted at Dachau in 1943, and referenced at the start of the book, are at the heart of the storyline for the book. As a reader you just don’t know how they will come into the plot as the storyline is interspersed with a different viewpoint of an unknown victim.

The story is set against an unforgiving snowy landscape of southern England. As a southerner I struggled with this idea as in my lifetime we have only ever had a few days of snow rather than the continuous snow suggested in the story. However, the harsh winter conditions ramp up the tension by giving the reader a constant sense that time is running out for the victims.

The story starts at an isolated farmhouse where firefighters have been called. An outbuilding has been set alight and the frozen body of a naked young man curled into the foetal position has been left in the yard. One the doorstep of the farmhouse are a couple of chess pieces carved out of ice. Two young girls are found alone in the house and their mother is missing. Detective Dove Milson is part of the serious crime team investigating the murder and trying to find the missing woman. However, the team are dropping like flies with a bout of flu that is doing the rounds and resources are stretched.

Narcissistic cruel characters are at the heart of this crime. They contrast dramatically with the softer but determined female detective trying to do DIY and plan a wedding. I did have to suspend disbelief quite a lot but... thoroughly enjoyed this page-turning work of fiction.
------
Reviewer: Christine Hammacott

D.E. White writes psychological thrillers for HQ Digital (HarperCollins). She lives near the Sussex coast, and has two children, both of whom are bookworms, so it must run in the family!