Can You See Me Now? by Trisha Sakhlecha 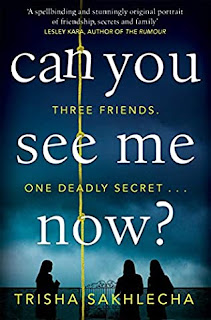 
Can you see me now? is a whodunit set across two timelines, 15 years apart.

Alia is a teenage girl who joins Westcott, an exclusive private school in Delhi, India, where she tries to become part of the popular group led by best friends Noor and Sabah. Alia’s parents work abroad and have little time for her. She has been dumped on her grandparents so is desperate to make friends, fit in and feel wanted, and much of the story explores the changing group dynamics. The teenagers are selfish, spoilt and often wayward, and the story follows their friendships, rivalries and jealously, with the out-of-control behaviour escalating as the story progresses — until one of the group dies.

15 years later, Alia is a cabinet minister in the India government trying to get re-elected. Sabah is a struggling documentary producer desperate for her next project. In their own ways both are haunted by the death of their friend. With nothing else in the pipeline, and after she receives a page from Noor’s diary which raises questions about her death, Sabah decides to investigate and use her findings for her next documentary.

Throughout the story it becomes clear that with such a volatile group of teenagers anyone could have been responsible for Noor’s death. Although set in India there is actually very little feel of Indian culture within the book.  The characters are very westernised and it has the same feel as if it was set in the Home Counties or a town in America. The characters are believable, though like many teenagers not particularly likeable as they struggle with peer pressure and their own identity issues.

Trisha Sakhlecha grew up in New Delhi and currently lives in London.  She works in fashion and is a graduate of the acclaimed Faber Academy writing course. In the past, Trisha has worked as a designer, trend forecaster, and lecturer.   For the story in her second book Can You see Me Now?  Trisha draws on a true story  - a famous scandal that erupted at her own high school.

Christine Hammacott lives near Southampton and runs her own design consultancy. She started her career working in publishing as a book designer and now creates covers for indie-authors. She writes page-turning fiction that deals with the psychological effects of crime. Her debut novel The Taste of Ash was published in 2015.  To read a review of A Taste of Ash Click on the title