‘When He Finds You’ by Sadie Ryan 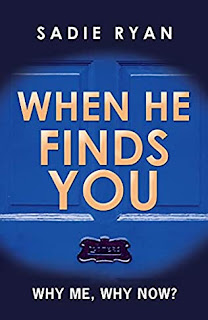 When Gemma and Oliver met, they fell in love, married and were happy, happy, happy. And when Oliver lost his job, he and Gemma set up a small online business together and worked side by side, content just to be with each other. The business prospered and they took on staff and employed an accountant, Peter, to deal with the financial side of things and to give them business advice. And that was when things went wrong, very seriously wrong. Peter – Peter the Bastard – cleaned them out, took them for every penny they had. They went bankrupt, had to sack their staff and, unable to pay their mortgage, lost their home. Oliver finds the stress unbearable. So does Gemma, but she has a strong inner core arising from having endured a dreadful childhood with a sexually abusive stepfather and a neglectful mother, a situation from which she had only broken free by getting to university – and by taking revenge against her stepfather. But those are matters which she has kept secret all her life; Oliver knows nothing of this.

But the prospect of penury for herself and Oliver is unbearable so when a complete stranger offers to help her with substantial amounts of money she accepts the offer. Of course, it is strange, of course she should, and does, smell a large and stinking rat. But the sum offered is large enough to stem the tide of debt at least for a while and there don’t seem to be any strings attached – certainly not sexual ones – so she takes the money and then more money and then the offer of a well-paid job, or rather a non-job, is too tempting although Oliver, who has until now implicitly trusted Gemma, does become suspicious. But by this time it is too late, for we know the apparent stranger – Jake – does know very well who Gemma is from a long time ago and his motive is revenge, best tasted, as the saying goes, cold and very long drawn out, for an episode long ago. To this end he has already infiltrated himself into the private details of Gemma’s life, not just online, but into the actual modest house which they had rented after losing their home, and he uses the knowledge he acquires to torment her.

I must say, when I began reading this story, I felt that Gemma was a complete idiot for accepting Jake’s offer. Surely the existence of the large and stinking rat must have been obvious. But Gemma’s desperation at her and Oliver’s financial plight is so strongly depicted and the description of her agonised attempts to break free of the web of steel in which Jake is enmeshing her so gripping that I read on regardless. Why me, why now? is Gemma’s anguished plea printed on the front cover of this absorbing book – will she ever find the answer? And will her marriage endure the storms that have been unleashed?

Only one quibble: there are quite a few misprints which surely should have been picked up at proof stage.

Recommended, particularly for those who like psychological suspense.
------
Reviewer: Radmila May

Sadie Ryan  is an author who loves animals and lives in leafy Cheshire in the North West of England. She has completed two psychological suspense/domestic noir novels. Her debut novel, Behind Closed Doors, was snapped up by publishers Ruby Fiction and published May 2019. When he Finds You is her second book. When asked where she gets her ideas from, she says, ‘From observation, inspiration and lots of wicked thoughts.’