‘Cat Among the Herrings’ by L C Tyler 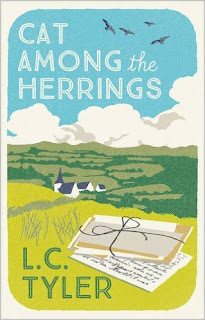 The village of West Wittering was burying the last of the Paghams, a family, the rector said had for centuries been significant landowners in the area. That the family fortunes had in recent years declined through gambling, drinking and bribery, he glossed over. Robin Pagham had met a tragic end when out sailing. “Probably drunk” mused the congregation.  However, it appeared that Robin’s fiancée Catrina did not share the general view, as just as they were all ready to take their leave of the church and head for refreshment at the wake, Catrina lifted her veil and surveying the congregation declared: ‘One of you bastards murdered Robin, and I’m going to have your arse.’

At the wake Ethelred Tressidor funds himself buttonholed by Catrina to find out who killed Robin, but he politely refuses. However, when taxed by journalist Tom Gittings, who reveals that his family and the Paghams have lived side by side as it were for centuries, and asks Ethelred to look into the murder of his ancestor John Gittings, he is intrigued. After all, there might be a book in it.

When Ethelred’s former agent Elsie Thirkettle  gets wind of a possible murder investigation in the village of West Wittering, she wastes no time in scheduling a visit. While Elthelred proceeds to investigate the murder of John Gittings, Elsie pursues her own investigations, with comic results.

Despite their current estrangement it was joy to visit again with Elthelred and Elsie. An intriguing murder, interspersed with the life of a literary agent.  All those rejection letters to write, to point budding authors in the right direction with encouragement and kindness. And to help one’s PA to understand irony.

I loved this book. And heartily recommend it.
------
Reviewer: Lizzie Hayes