‘Darkness Beyond’ by Marjorie Eccles 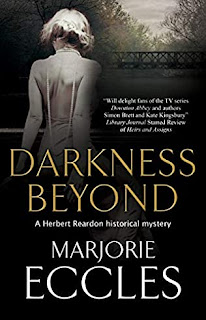 February 1933 in Folbury, a market town near Birmingham, we first encounter brother and sister Teddy and Thea Millar, successful property developers living in their new property named Casa Nova.  Paul Millar their elder brother - not heard from since the end of the Great War is presumed dead.  Thus, the sudden arrival of Paul without warning is a great shock to his two siblings. Where has he been for the last 14 years? Why no word? What has he been doing?

DI Herbert Reardon and his wife Ellen have purchased the old lodge unoccupied for many years unaccountably having escaped the demolition of the mansion that it once served, and the childhood home to the Millar family.

Two weeks later Wesley Pugh, general manager for the Millar’s finds Paul’s body floating in the canal. To Reardon relatively new to the town the dead man is a stranger, but as his sergeant Joe Gilmour says, Wesley and Paul used to be mates before the war, so it’s understandable he would recognise him. Initially it is assumed to be a suicide not unknown by soldiers returning from the war, some having wandered about shell-shocked with no memory for years, who finally end it all.  But an examination by Dr Kay Dysart tells a different story. Normally a woman of few words she says ‘I feel sorry for his family. Sadness, that a brave man who had faced death in the shape of one enemy, gone through God knows what, had come home to his family and loved ones, only to meet death at the hands of a different adversary’.

And so, Reardon commences his investigation firstly with Wesley Pugh who seems strangely unmoved by the death of his former friend. Reardon’s visit to the Millar’s to inform them their brother had died was less than satisfactory. The subsequent discovery that Paul had a son did provide a possible reason why Paul had returned to Folbury, but why now?   Enquires reveal that Paul’s son Matt is now an artist, living alone.

As Reardon continues his investigations, it is clear that few people seemed to have welcomed Paul back to his home town. All Reardon can glean from Wesley Pugh is that ‘we had our differences.’

Meanwhile Reardon is receiving threatening letters from a small-time crook that Reardon had got sent down for breaking and entering, now back on the street and gunning for Reardon. Joe Gilmour thinks that he should take it seriously.

Rich in interesting characters, Wesley Pugh, Connie Randle and her daughter Imogen, and what of the solicitor, Purbright of Purbright, Purbright and Brownlow. All seem to have secrets, but do they have a bearing on the death of Paul Millar, and just what has he been doing for 14 years?

Darkness Beyond is an intriguing mystery with a fascinating 1930’s background. A compelling and enjoyable read, which is highly recommended.
------
Reviewer: Lizzie Sirett

Marjorie Eccles was born in Yorkshire and spent much of her childhood there and on the Northumbrian coast. The author of thirty-three books and short stories, she is the recipient of the Agatha Christie Short Story Styles Award. Her earlier books featuring police detective Gil Mayo were adapted for the BBC. Her most recent series is set after the Great War and features DI Herbert Reardon. There are five books in the series. She lives in Hertfordshire.
Posted by Lizzie at 16:00