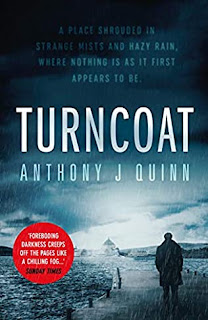 Lough Derg, in County Donegal, the Irish Republic, is where St Patrick, the patron saint of Ireland, is said to have caught a glimpse of Purgatory on an island – Station Island, in the centre of the lough. Since then, for over a thousand years, it has been the site of a pilgrimage for numerous devout Catholics who undergo three days of fasting, sleep deprivation, and walking over rough stones and sharp pebbles so that through their pain and suffering and by taking part in various rituals on their progress around the island they pay tribute to the suffering of Christ while on the Cross.

But not everyone who comes to the island is inspired by devotion. In 1994, as the Troubles which had been tearing Northern Ireland apart for years are now showing the possibility of peace, one person whose purpose is not devotional is Belfast detective Desmond Maguire. He has come to Lough Derg to meet with an informer whom he knows only as ‘Ruby’ from whom he has in the past obtained good information about violence planned by the IRA. However, not all Ruby’s information is good: the last had resulted in Maguire with three colleagues being ambushed at a remote farmhouse. Maguire had not been harmed but all his colleagues had been killed. As one of the few Catholics in the Royal Ulster Constabulary, Maguire has never been fully trusted by his colleagues while the Catholic community, north and south, regard him as a turncoat. And he cannot provide more clues as to who Ruby is: Ruby has ever only been a voice whispering down the telephone late at night, providing information, which is sometimes right, sometimes wrong.

On the day of the ambush Maguire received a picture postcard of Lough Derg and the island with its monastic buildings; on the back is a message to ‘Dear Turncoat’ with a list of confession times at the monastery with one name – Father Liam Devine – underlined. Partly under pressure from his boss, Chief Inspector Alan Pearson, who is himself under pressure from Special Branch and the British Secret Service, to find out more about Ruby, but also because of the increasing psychological burden of his situation, Maguire takes himself to Lough Derg in the hope that the elusive Ruby will manifest himself. When he gets to the island, the majority of the pilgrims are clearly what they say they are. But not all. There are two policemen from the Irish police (the Garda Siochana), Paddy and Kieron, who trot round after him like suspicious dogs and watch his every step. There is a detective from the Garda, Inspector Marley, with an abrupt, sinister manner. And Perpetua, a beautiful young woman, kind, gentle but enigmatic. Who are they really? Can any of them be trusted?

Meanwhile, Pearson and his Special Branch colleague are analysing Maguire’s actions: can he be trusted? And in the paranoid atmosphere of the Troubles, can they? Can anyone trust anyone else?

This excellent novel has been described as a ‘metaphysical detective story’. Maguire’s growing difficulty in differentiating truth from falsehood in his own thoughts and actions, his unbearable guilt at what he has been caught up in, and his increasing consumption of large amounts of alcohol are all contributing to his mental instability, his feeling that he is adrift and unmoored from reality. The names of some of the characters have a symbolic resonance: the ghost Marley in Charles Dickens’ Christmas Carol is there to warn Scrooge to mend his ways. This Marley is not a ghost, but is he performing the same function? And Perpetua is the name of a 1st century saint and martyr whose diary may be among the first Christian writings to indicate that to follow one’s conscience, one’s inner voice, was preferable to obeying the commands of the state. Is that what this Perpetua is indicating to Maguire?

Turncoat is not an easy read. The mists and shadows that envelope the island parallel the mists and shadows in Maguire’s mind, and I am not sure the story comes to a conclusion. (Maybe there’ll be a follow-on). But it is thoughtful and beautifully written. Highly recommended.
------
Reviewer: Radmila May 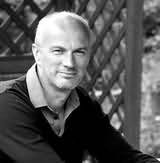 Anthony Quinn is an Irish writer and journalist. His debut novel Disappeared was shortlisted for a Strand Literary Award by the book critics of the Guardian, LA Times, Washington Post, San Francisco Chronicle, and other US newspapers. It was also listed by Kirkus Reviews as one of the top ten thrillers of 2012. His short stories have twice been shortlisted for a Hennessy/New Irish Writing award.