Information about Marion Mainwaring (1922-) is extremely difficult to come by.
Her career has mostly been concerned with the study of Edith Wharton, and she produced a ‘completed’ version of Wharton’s novel The Buccaneers in 1993.
She wrote two mysteries -
Murder at Midyears (1953)
and Murder in Pastiche (1954).
I have not to date been able to obtain the former (at anything like a reasonable price!) but the latter, which is easily available, is a classic of the genre and the greatest mystery pastiche I have ever come across. 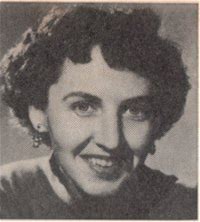 The idea is simple, if absurd. Nine detectives are crossing the Atlantic on an ocean liner when a murder occurs; they all, in their various ways, contribute to the solving (or non-solving) of the crime. The nine detectives are Trajan Beare, Spike Bludgeon, Mallory King, Sir Jon. Nappleby, Jerry Pason, M. Atlas Poireau, Lord Simon Quinsey, Miss Fan Sliver, and Broderick Tourneur; corresponding (I do not know if this is redundant for readers of this publication but I did not know them all first time around!) to Nero Wolfe, Mike Hammer, Ellery Queen, Appleby, Perry Mason, Poirot, Wimsey, Miss Silver and Alleyn. The first judgement one has to make is about the accuracy and humour of the individual pastiches. Here my reading of American mysteries is inadequate for me to make a substantive judgement as far as Wolfe, Queen and Mason are concerned. Spike Bludgeon may be generic but I have read enough first-person pulp noir to know that Mainwaring’s portrait and writing is both ruthlessly accurate and extremely funny. Anyone who wants to see absurd macho posturing skewered with a razor sharp knife should read the book for these sections alone.

Of the British detectives all the pastiches are very successful and will appeal to anyone who has read the relevant series and has a sense of humour. What was most surprising to me was that her greatest successes among these are Appleby and Alleyn. Mainwaring’s pastiches do not involve just an approximation or satire of each detective’s (and author’s) particular verbal and psychological habits; she manages to make the aspect of the case which each detective investigates pertinent to the way in which the detectives operate in their books. I think Appleby succeeds because one feels that Mainwaring enjoyed herself most with him; she is obviously an extremely literate and well read writer, so Innes’ literacy, love of reference, poetry and allusion allow her full scope for her own powers. Alleyn though was, for me, a somewhat surprising selection as he is not an obvious target (in the way that Poirot is for instance); but Mainwaring picks up and exaggerates a certain aspect of Alleyn’s character - his puritanism - with a deadly accuracy which actually makes one very aware of it when
re-reading Marsh (as I often do).

So, as far as I am able to judge, all the individual pastiches of the detectives are wonderfully accurate. But the book has three vital qualities beyond this which contribute to its classic status. In the first place, though this should go without saying of a classic, it is very well written. Secondly the other characters who appear in the book are wonderfully drawn ; the captain and ship’s doctor in particular are comic creations of the very first 0rder. Finally, and vitally, the mystery itself is highly satisfactory and wholly apposite; when the denouement arrives it leaves the reader gratified and completed.

Taken together the qualities which Mainwaring exhibits in Murder in Pastiche are those of a writer who has the potential to be a great mystery writer. On its own the book is a classic and an absolute must for any Golden Age fan; not only is it extremely funny, it also makes the reader critically re-examine the tricks and tics of even very well-known favourite authors - it is surely this quality which elevates a pastiche from good to great. Whether Murder at Midyears was anywhere near as good? why Marion Mainwaring never wrote another mystery? and where she accumulated the knowledge and skill to have written such a classic? are in themselves - mysteries! And that, I suppose, is wholly appropriate.