‘I Am the Night’ by Ethan Cross 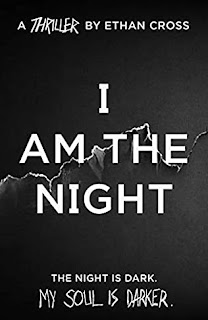 “The night is dark
My soul is darker…”

I Am The Night juxtaposes two protagonists.  The first, Francis Ackerman Jr. is a sadistic psychopath who wreaks havoc as he moves from place to place killing complete strangers without mercy or remorse.  The second is Marcus Williams, a former New York City detective who is tormented by memories of his past life and has recently moved to the small town of Asherton to make a new start.  Things seem to be going well for Marcus when he meets Maggie, the local sheriff’s daughter.  The two are clearly attracted to each other and provide a love interest although, as with most things in the book, things soon become complicated when it transpires that Marcus is not the only newcomer in town – Ackerman is already preying on some unfortunate residents in the area.

Ackerman and Williams at first seem to be opposites, but, as the saying goes, opposites attract.  Both men have complicated family histories that have left them traumatised and emotionally damaged.  As the narrative progresses, they find their paths moving inexorably closer until they are bound to collide.  The question is, who will survive and what carnage will their violent encounter leave in its wake?

This is a high octane, fast-paced and brutal thriller as the ex-lawman is compelled to track down the serial killer only to find that he becomes the hunted.  In between the gruesome murders and non-stop action, the author weaves a political sub-plot and allows his characters to philosophise about the meaning of life and death.  The characters are carefully nuanced, and the book depicts more than just a battle between good and evil as it exposes flaws in the heroes as well as the villains.

I Am The Night is the first in the Ackerman Thrillers series and a thriller it certainly is, even the book’s cover evokes evilIts pages portray cruelty and sadism with explicit realism.  Cross’s graphic prose reveals the very worst we expect of a masochistic killer who believes that murder is his vocation.  Yet, the novel also taps into contemporary anxieties relating to deep state conspiracy.  Alongside the appalling acts of terror described as Ackerman murders with impunity, another theme reveals political corruption at the highest level of government as law makers become law breakers.

Dot Marshall-Gent worked in the emergency services for twenty years first as a police officer, then as a paramedic and finally as a fire control officer before graduating from King’s College, London as a teacher of English in her mid-forties.  She completed a M.A. in Special and Inclusive Education at the Institute of Education, London and now teaches part-time and writes mainly about educational issues.  Dot sings jazz and country music and plays guitar, banjo and piano as well as being addicted to reading mystery and crime fiction.
Posted by Lizzie at 14:11