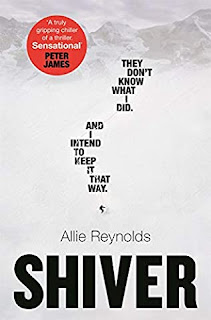 Good mystery novels keep you guessing, and on the edge of your seat until the big reveal. They also feature characters whose fate you start to care about, and a well-realized setting you can almost experience along with them.

Really good mystery novels do all of the above and introduce you to a world you’ve never explored before. And by that definition, Shiver is a really good mystery novel. Which, for a debut author, is an achievement worth bragging about. What Allie Reynolds doesn’t know about the snowboarding world would probably struggle to fill the back of a stamp, and now I know a little more about it too. I even knew the answer to a question about it on a TV quiz show I was watching!

The set-up is a familiar one: five people trapped in a remote building with a murderer on the loose – and it could be one of them. The five are all former snowboarding contenders, and they each received an invitation to a reunion at a venue where tragedy struck ten years ago during a major competitive event, leaving Odette, a world-class snowboarder, quadriplegic.

Curtis’s sister Saskia also disappeared without trace at the same event, and Curtis is still in search of answers. Saskia has recently been declared officially dead, and the bodies of people who meet a sticky end on the winter sports slopes often emerge as glaciers shift and melt. Dale and Heather got together during the fateful event and are now married and running a business. Brent was once a successful model and a top snowboarder. And then there’s Milla, who narrates the whole story, both then and now.

The first mystery is who arranged the reunion. Curtis, Dale, Heather and Brent think it’s Milla; she knows it isn’t and thinks it’s Curtis. At first, it’s unimportant – but then their phones and laptops go missing, the lifts to the village aren’t working, and it becomes plain not only that they are trapped on the mountain but also that someone is out to cause conflict.

The action switches between now and then, and in the now chapters the tension grows as suspicion falls on one of them after another. What (or who) caused Odette’s accident? What really happened to Saskia? And who is responsible for the strange things that keep happening – power outages, threatening messages scrawled on mirrors, a lock of hair under a pillow...?

All this and an in-depth view of the snowboarding world too. Shiver ticks all the boxes of a really good mystery novel – and it made me shiver in more ways than one.
------
Reviewer: Lynne Patrick

Allie Reynolds is a former freestyle snowboarder who spent five winters in the mountains of France, Switzerland, Austria, and Canada. Her short fiction has been published in women's magazines in the UK, Australia, Sweden, and South Africa. Born and raised in Lincoln, England, she moved to Australia in 2004. She lives on the Gold Coast with her two young boys and a cat who thinks he's a dog. Shiver is her first book.