‘A Mirror Murder’ by Helen Hollick 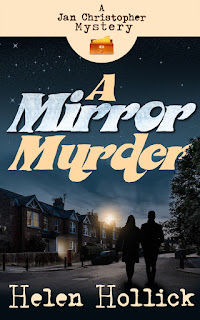 The story is set in 1971 in South Chingford, a suburb of North London, and it is narrated by eighteen-year-old Jan Christopher, with some shorter chapters by Detective Constable Laurie Walker.

Jan has already experienced a lot of loss and violence in her short life: her twin sister died in infancy, her detective father was murdered in front of her, and her mother abandoned her. However, now she is very content, living with her uncle, Detective Chief Inspector Toby Christopher and his wife, Madge, who both love Jan and treat her as if she was their own daughter. Jan is not academic, but she loves books and is passionate about reading; her ambition is to be an author and she spends much of her free time writing. This means that she enjoys her job at the local library, although she dislikes the library manager, a pompous, bullying man. She gets to know the routines of many of the regular library patrons, whether it is the teenagers asking for help with homework, or the old lady who comes in to enjoy the warmth and to cut the special offer vouchers out of the newspapers provided for people to read, a bit of harmless pilfering that the manager is unaware of and the rest of the staff ignore.

Jan is a shy girl who doesn’t think she is good looking but as soon as she meets her uncle’s new detective constable, Lawrence ‘Laurie’ Walker, she feels an immediate attraction. Fortunately, Laurie feels the same way, he had not believed it was possible to fall in love at first sight but, as soon as he sees Jan, he knows that she is the girl for him. Alongside Joan’s narrative there are some short chapters in Laurie’s viewpoint, describing how, in pursuit of promotion, he transferred from a quiet police force in his native Devon. He hated his first posting to the East End of London and is pleased when he is seconded to South Chingford, and when meets Jan he knows that he had made the right decision when he chose to leave Devon.

Jan and Laurie tentatively start their new relationship but there are many criminal distractions, including a flasher in Epping Forest who is targeting young women, the abduction of a baby boy, and the murder of an elderly woman. The murder has a special significance for Jan, as she knew the victim, and she is determined to do everything she can to help her uncle and Laurie solve the crime.

A Mirror Murder is the first book in the Jan Christopher series. It is a delightful short cosy crime novel with a cast of engaging characters and a wealth of fascinating, nostalgic details about life in the 1970s. This is the first book in is an enjoyable and unusual new series, and I recommend it to readers who appreciate romantic cosy crime.
-----
Reviewer: Carol Westron

Helen Hollick is a British author of historical fiction. She is the author of the Arthurian trilogy, The Pendragon's Banner and the novels Harold The King and The Hollow Crown.