‘Angels at Twenty Past’ by Marchell Abrahams 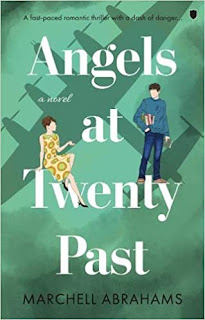 Cassie Greatrex and her mother, after a brief excursion, are returning to the family home deep in the Surrey countryside when they realise that the house has been burgled. Nothing has been taken although Cassie’s father’s study, always untidy, has been reduced to even greater chaos. They call the police who can find no clue as to who the intruder might be, and they, and Cassie’s father, formerly a soldier, then a highly successful venture capitalist, now an amateur archaeologist, returns from Greece and Turkey, cannot see that anything has been taken. Perhaps whoever it was looking for something that wasn’t there. After a few days Cassie returns to work – not that what she does can really be described as work; her father has settled a sizeable trust fund on her some of which she has invested in a beauty salon in the Kings Road, Chelsea, run by a friend and where she works a couple of days a week.

Enter two young men. First, Colin Bardsey, studying linguistics and ancient history at an Oxford college; pleasant, plausible, very anxious to get to know Cassie and to meet her father, because he says, his great-uncle had known her grandfather during World War II – something to do with works of art looted from a German museum about which Colin is writing an article – but also concerned to hear about the burglary about which he seems to know a surprising amount. Cassie’s grandfather had been in Germany at the end of the war tracking down stolen works of art, he has no recollection of anyone called Bardsey. Then, enter the second young man, a fiery Welshman, Huw Trefor, also studying archaeology and clearly at daggers drawn with Colin. From this point, Cassie finds herself on a roller-coaster of adventure which leads her first to Oxford where she tracks down the fiery young Welshman who tells her some unpleasant facts about Colin. There is a particular copy of a famous translation of the Ancient Greek poet, Homer, of The Iliad (the story of the siege of Troy) which Cassie’s grandfather has lent to her which Colin tries to wrest from her by force. He is obsessed by the idea that there are lists in the book which he must have. There are the famous treasures of Troy (discovered in the 19th century by the German Heinrich Schliemann, and looted from a German museum at the end of the war). Before long, Cassie and Huw are off to the National Archives in Kew to see what they can find, then to a regimental museum in Hythe and then to Orvieto in Italy where they encounter once again Colin Bardsey still intent on getting his hands-on Cassie’s grandfather’s Iliad.

There is a frightening episode in an ancient tower with a deep, deep well. There is an enigmatic German who is instrumental in rescuing the three of them. And when Cassie and Huw get back to London there is a menacing Russian who also wants the lists. How on earth will this all end?

This is a very enjoyable, fast-paced book firmly in the romantic suspense genre with a few references to Mary Stewart’s first novel, Madam Will You Walk. Cassie is a great heroine; although she did not go to university, being more interested in fashion and beauty, she is bright and sparky and sharp as a tack. Huw may be the male interest but with his sharp intelligence and quick wit he is a long way from the beefcake stereotype of much romantic fiction. Recommended.
------
Reviewer: Radmila May

Marchell Abrahams is the widow, daughter and descendent of soldiers (and one naval officer). She endured a haphazard but surprisingly successful variety of educational methods, and is a dedicated, self-confessed eclectic, amateur etymologist and word-nerd. She lives in Scotland.