Elswyth Thane, was one of the most beloved American writers of her day. She was known for her romantic adventure novels and histories, both fiction and nonfiction. But her novels always managed to have an element of mystery in them as well. Thane offered her readers a good strong story question, if not always a dead body, and she planted her clues and foreshadowings with skill.

Thane was born Helen Ricker in Burlington, Iowa. Her family moved to New York when she was 18. There Helen Ricker changed her name to Elswyth Thane and began her career as a freelance writer. She said, “I worked for a time at a film studio just as the ‘silents’ were turning into the ‘talkies’ and the scenario problems taught me something about economy of words and not over-writing.” Her first novel, Riders of the Wind, was published in 1926. “Although,” she said, “there was nothing I wanted less for myself than adventure like that which drove that heroine to the Himalayas.”

When she was 27 years old Elswyth married 50-year-old naturalist and pioneering deep sea explorer William Beebe. They were married on a friend’s yacht and Mrs. Theodore Roosevelt, widow of the former President, was one of the guests at their wedding. Thane was emphatic, though that none of her novels, “especially that one about a woman who married an explorer (From This Day Forward) was in any way autobiographical. The sole exception being Reluctant Farmer.” (her autobiography)

In the mid-1970’s when I was an aspiring writer and feeding my voracious reading appetite nonstop I devoured every word Elswyth Thane wrote and, somewhat audaciously, began a correspondence with her that lasted until her death. All of the quotations in this article are taken from her letters.

She wrote about her marriage: “We were often separated for months at a time, he at his jungle field stations or oceanographic work, I at the British Museum or somewhere like Mount Vernon on my own job. This sort of schedule, if you can call it that, never did our over thirty years’ marriage any harm and on the contrary, we always had something to talk about! There was no boredom or staleness and very little silence in the Beebe household.  “I was always very proud of being his wife. . . Without his generous encouragement I might never have amounted to much.”

The Beebes were friends with Rudyard Kipling who features in her books England Was An Island Once and Reluctant Farmer. Thane wrote, “Kipling was a darling. He came to Bermuda when we were there and we all lunched at Government House, and it was pretty memorable.  His wife was Exceedingly tiresome.”  A devout Anglophile, Thane spent much time in England researching her novels, even spending time there in the early days of World War II. About that she wrote:

I can still see that dreard little school where we fitted the gas-masks, and the headlights of cars turned on at midnight so they could see to go on digging trenches in the parks all night--and there were funny things too, that you couldn’t write about--like the time all the sirens went off down around Cheltenham where I was, and nothing happened, and the next morning a rather shame-faced BBC news man reported that a large green caterpillar had crawled into the mechanism somehow and caused a ‘short’ which set everything off, and its incinerated body was found next day at the scene of the crime!

Thane’s love of England comes through all of her writing, but perhaps most clearly in her best-known work, The Williamsburg Novels. This series of seven novels (which she originally envisioned being one book) trace the generations of two families on both sides of the Atlantic from the American Revolutionary War (which she calls a “family feud”) through the beginnings of World War II. I asked her why she continue through that war. “That would have meant the Battle Britain--too much, too painful. I couldn’t do it,” she replied.
Closer to the mystery genre is Tryst, one of the most engaging ghost stories ever written.
Dying alone in the Egyptian desert, Hilary Shensten prays, “God, give me England before Heaven. No, give me Heaven instead of England.”

Finding a locked room at the top floor of the house her family is renting for the summer, Sabrina picks the lock on a closed room and becomes engrossed in trying to discover the identity of the man whose personal study this was.

About her writing method, Thane said: “Altogether, I seem to have written some 30-odd books. No manuscript of mine is ever worked on by any hand but mine until it goes to the printer. I write the first draft in longhand in ruled notebooks from Woolworth’s and I type and re-type every page myself through the final copy. . .

“How I have got as many books written as there seem to be now, I shall never know, as I have never had a regular working schedule nor any temperamental ‘seclusions’ to work in. I wrote when, where and if I could find a chance to sit at the desk, often late at night and sometimes still wearing the evening dress in which I had returned from theaters or parties or dances with my husband, for I never allowed ‘my work’ to interfere with our crowded social calendar.”

Although much of Elswyth Thane’s work may be forgotten, I am doing my bit to revive her memory by writing The Flame Ignites, a prequel to my Elizabeth & Richard literary suspense series. Elizabeth, a young graduate student meets Richard when she is in Vermont working on her Ph.D. thesis— yes, a biography of Elswyth Thane Beebe. 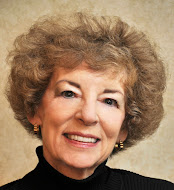 Donna Fletcher Crow is the author of 40 books, mostly novels dealing with British history.  The award-winning Glastonbury, A Novel of the Holy Grail, an Arthurian grail search epic covering 15 centuries of English history, is her best-known work.  She is also the author of The Monastery Murders: A Very Private Grave, A Darkly Hidden Truth and An Unholy Communion as well as the Lord Danvers series of Victorian true-crime novels and the literary suspense series The Elizabeth & Richard Mysteries. Donna and her husband live in Boise, Idaho.  She is an enthusiastic gardener. To read more about all of Donna’s books and see pictures from her garden and research trips go to:
http://www.donnafletchercrow.com
Posted by Lizzie at 14:12