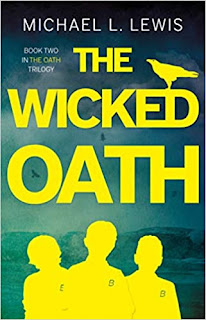 ‘Sleeth and Tunk would be thrilled to see that the first entry in the Discipline Ledger is the number one object of their hatred: JONATHON SIMON.”

Jonathon Simon is the main protagonist in this second novel of Michael L. Lewis’s Oath Trilogy.  The book is set in Blackleigh, an expensive and highly esteemed public school boasting over a hundred years of history.  A quasi-military code of conduct defines the school’s disciplinary system as it seeks to develop the boys’ sense of honour and duty.  One particularly unusual tradition is that prefects, rather than the teaching staff, are responsible for dealing with pupils’ misdemeanours and poor academic performance.

As Jonathon begins his second year at Blackleigh, he is shocked to find that most of the prefects in charge of his house, Trafalgar, are manipulative bullies.  They threaten and abuse the boys they should be nurturing - this year they are gunning for Jonathon and his friends.  The dreadful senior boy Sleeth is appointed Head House Prefect and is joined by the equally odious V H Tunk as his second in command.  The pair, who have committed any number of atrocities in the first book of the series, now make plans to oust Jonathon from the school.

To make things worse, following the sudden retirement of the previous incumbent, a new headteacher, Dr Macleod, is introduced to the school.  Macleod cuts a dour figure when he announces that on Wednesdays not only will the boys rise at 5:30am to go on a run, but they must also attend an additional chapel service in the evening.  Jonathan wonders whether the situation can get any worse!

The abnegation of power and responsibility by the teaching staff emboldens the prefects who consistently hoodwink their masters.  Sleeth and his acolytes sink to new levels of depravity as they misuse their positions of trust.  Jonathon and his friends realise they are in peril and seek first to avoid, and then to expose their tormentors.  This puts them in even more jeopardy.

The Wicked Oath has a fast-moving plot and a series of sub-plots that engage the reader as we root for the young hero.  The novel oozes with malevolence and is not for the faint-hearted, though there is a welcome love interest that allows a brief respite from the tyrannical bullies.  The novel will appeal to those who enjoy the cut and thrust of a good old-fashioned battle between good and evil.
------
Reviewer: Dot Marshall-Gent

Michael L. Lewis  was born and raised in England. After preparatory school in London, he was educated at Stowe School, Buckingham. Michael says, "My novel takes the reader on a journey through the lives of three dynamic schoolboys between the ages of 13 and 15, and the extraordinary triumphs and tragedies that they experience." This book is the second in a series. Michael now lives in Los Angeles, California, has a law degree, and writes full-time. He was on the Board of Trustees for several schools and has been a member of the same book club for twenty-five years.