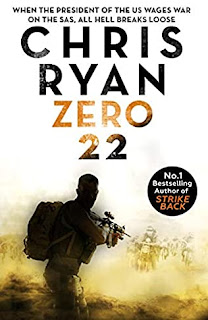 When an SAS group codenamed Zero 22 and led by Danny Black drive a convoy across the desert in Syria on a mission to escort a group of Kurds out of the country, they are not expecting too much resistance. However, a sudden attack on them means the task ends in devastation.  Danny finds evidence of a Russian missile launcher, photographs it and makes his escape.

On his return safely back to England he reports to his C.O and is told a photo he also took of a dead body was of a member of the Wagner Group, a private military group connected to Russia.

It is obvious there has been a leak, but who is responsible? It must be someone high up in authority. An American, General O'Brien comes under suspicion and Danny is given instructions to assassinate him. As he desperately wants to avenge the death of his comrades of Zero 22, he has no hesitation in accepting the assignment. He is teamed up with M16 agent Bethany White. They have a bit of a history and she once had wanted to kill Danny. Can he trust her?

They are dropped into the desert near Amman where O'Brien is known to be. They make it to a safe house where they pick up new identities. So begins what Danny and Bethany thought would be a straight forward mission, but revelations at almost the last minute throw everything into chaos. Not all is as it seems. They have to be flown out of Amman unexpectedly and at short notice.

Danny and Bethany find themselves the target of forces other than Russian and have more than one brush with death. Things get really complicated when they need to discover the truth in time to prevent a suspected attack on American soil. Can they manage it in time and who is behind it? Even the American President comes under suspicion.

What a great book, it leaps from one heart stopping moment to another with almost continuous nail-biting action. I felt quite exhausted by the last page!

The attention to detail of the military action and the subterfuge that goes on reveals how much Chris Ryan really knows of the workings of the SAS and powers that be.

Chris Ryan was born near Newcastle in 1961. He joined the SAS in 1984. During his ten years there he was involved in overt and covert operations and was also sniper team commander of the anti-terrorist team. During the Gulf War, Chris Ryan was the only member of an eight-man unit to escape from Iraq, where three colleagues were killed and four captured. It was the longest escape and evasion in the history of the SAS. For this he was awarded the Military Medal. For his last two years he was selecting and training potential recruits for the SAS. He wrote about his experiences in the bestseller The One That Got Away, which was adapted for screen, and since then he has written other works of non-fiction, bestselling novels and a series of childrens' books. He lectures in business motivation and security and is a consultant for a security organisation.

Tricia Chappell. I have a great love of books and reading, especially crime and thrillers. I play the occasional game of golf (when I am not reading). My great love is cruising especially to far flung places, when there are long days at sea for plenty more reading! I am really enjoying reviewing books and have found lots of great new authors.
Posted by Lizzie at 15:33