‘The Woman Downstairs’ by Elisabeth Carpenter 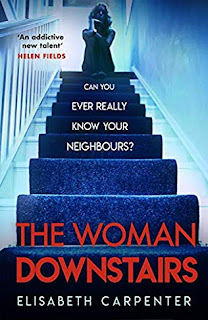 Sarah lives in a flat with her teenage son and works in a café owned by her best friend Kim. She hardly knows anyone in the other flats, and is both shocked and curious when a body is found in the one below hers, especially when it turns out that it’s been there as long as she has lived in the block.

Then there’s Laura, who has lived alone since her father’s death after a long illness and is trying to piece together some kind of life. She gets a job in telesales and is surprised to find one of the managers is Tom, who used to be her friend at primary school.

In Elisabeth Carpenter’s earlier novels she has never flinched from addressing difficult issues. She’s offered answers to hard questions like how far can you trust your own family members? and can a mother’s loyalty be stretched too far?  This time she asks another tough one:  how well we do we know our neighbours, and do we bear any responsibility for them?

There are various issues to be resolved: who lived, and died, in the flat downstairs? How did he (or she) die? Why did no one realize he (or she) had gone missing? Who is Catherine, and how does she fit into the story? And who are the mysterious strangers who keep appearing?

Sarah is studying journalism and has a keen eye for a mystery. Her story interweaves with Laura’s attempts to build a new life, and slowly some answers begin to emerge. Elisabeth Carpenter’s skill at creating rounded, recognizable characters is very much in evidence, as is her ability to evoke highly visual settings. Laura is intelligent, and less socially inept than her upbringing might suggest. Her workmate Suzanne is loud and on the gossipy side of gregarious. Sarah’s policeman ex-husband is self-obsessed and borderline controlling.

The flats aren’t luxury apartments, but they fall short of being seedy and disreputable. Kim’s Kaff is several notches above greasy spoon. Laura’s workplace is noisy and slightly depressing, but her flat is neat and comfortable.

The plot goes through some satisfying twists and turns, and the questions are answered eventually – all except the biggest one: how well do we really know the people around us? The result is another piece of quality writing from this award-winning author; it will make you laugh, cry, and above all think.
------
Reviewer: Lynne Patrick

Elisabeth (Libby) Carpenter lives in Preston with her family. She completed a BA in English Literature and Language with the Open University in 2008. Elisabeth was awarded a Northern Writers’ New Fiction award and was longlisted for Yeovil Literary Prize (2015 and 2016) and the MsLexia Women’s Novel award (2015). She loves living in the north of England and sets most of her stories in the area, including the novel she is writing at the moment.