‘After Dark’ by Dominic Nolan 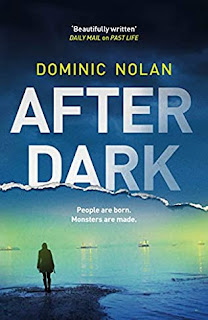 
In the Prologue to this book, set five years ago, Abigail Boone, former detective sergeant with the Kent Police, stalks and kills two people walking in a wood. They are former MP Hanley Moss and Teddy Blackborne, widow of the late industrialist, Sir Alex Blackborne. Why has Abigail done this? In a brief resume of the events in this writer’s first Abigail Boone novel, Past Life, we learn that Abigail had been investigating a paedophile ring of the rich and influential and had herself been abducted and held in conditions which, although she survived, led to retrograde amnesia so severe that she had no memory of her own life, even her husband Jack and her son Quin. But it is not for that alone that Abigail is seeking retribution; it is also for the girl Sarah Still for whom she had been searching when abducted who had been murdered, and for others who had suffered at the hands of aristocratic paedophiles.

We then move to Part One, the present day, and the accidental discovery in a field of a near-naked young girl who is unable to speak and is severely malnourished with signs of physical maltreatment, recent and older. Medical and psychiatric examination establishes that she is virtually feral, can barely walk, and seems to have been kept in the dark for years. The case is being handled by Detective Inspector Barbara ‘Barb’ Bowen and Detective Constable Barry Tayleforth, and also Detective Constable Storm Mathijsen, formerly a clinical psychiatrist, now a member of Kent Police’s Child Sexual Exploitation Unit. At first there is no clue as to the child’s identity nor as how she got to where she was found nor as to where she had been confined for so many years. And then there’s a breakthrough – a DNA link to the murdered Sarah Still whom Abigail Boone had been investigating before her own life was turned upside down. Abigail is now in prison; although due to be released very shortly, she will only assist Barb if she is released now; she tells Barb that someone is trying to ensure that she will not tell the police anything, someone who ‘tidying up loose ends’, someone Abigail calls ‘Sally’. But who exactly is Sally and what are these loose ends? And why is Abigail now in prison?

In Part Two, we go back four years. The deaths of Moss and Teddy Blackborne have not been linked to Abigail but she has not returned to her old job in the police. Instead she is acting as a sort of detective to local crime kingpin Mickey Box, ensuring that rivals on his patch are turned over to the police, in particular to former colleague Barb Bowen. And she is in a relationship with Storm Mathijsen , before the latter’s switch from clinical psychiatry to police detective. She is contacted by Kate Porter to find her son Noah Maxwell who disappeared 30 years ago. Kate is now the wife of a wealthy businessman but when Noah disappeared all those years ago Kate was a drug user and on the streets to feed her habit. The chances of finding Noah are slim but there is a connection with a large now derelict house called Eastry House with links to child abuse many years ago. Abigail’s researches begin to unearth all sorts of connections between what was happening four years ago and in the present day and this forms the structure of the narrative with switches to the past and the present and the over-shadowing presence of the earlier events.

Although there is much to praise in this elegantly written book, it is divided into Parts with rather obscure titles (eg The Future Tense of Joy) with each Part alternating between the present and four years ago (apart from the Prologue) but the chapters are numbered right through with only the first chapter in each Part being given a date.  More relevant dating would have made the story structure a lot easier. The prose is highly literary and mostly a pleasure to read, although some sentences had me foxed.

Overall, the story is not a cheerful read, nor should it be, considering the subject matter. But if you like dark and tormented characters, who talk in terse, elliptical sentences, and a bleak psychological landscape, then it will appeal to you.
------
Reviewer: Radmila May

Dominic Nolan was born and raised in north London. Past Life was his first novel.