‘One Way Ticket’ by Jay Forman 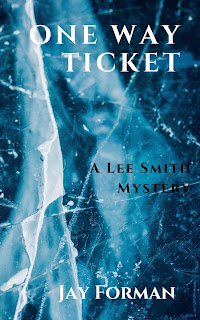 In One Way Ticket, the first of these stories, Canadian travel writer Lee Smith, who has visited many countries all over the world, is back in her native province, Ontario, and on her way to the last place she wants to go to, her old school, Berkshire, where she spent several miserable teenage years. Berkshire is a school for the children of the rich, so why did Lee, not at all from that sort of background, end up there? Because Lee’s surname is really Saddler and her father had been convicted of multiple murders and sent to prison, and Lee’s Aunt Emmy and Uncle Doug had, at considerable financial sacrifice to themselves, decided that Lee should go somewhere where she would not be judged for what her father had done. Except that her fellow-pupils had found out and had tormented her mercilessly. All of them, except for one, Jack Hughes, the richest boy in the school, who extended the hand of friendship to Lee when she needed it most. When Lee, now established as a successful journalist, hears from her Aunt Em that Jack is in hospital, having been injured in a car crash which may or not have been accidental, she contacts Jack who tells her that he was about to start enquiring into the death of a girl at the school and asks Lee to assist him.  Lee, aware of how much Jack has done for her and her family, feels honour bound to do so.

The girl is Kayla Wilkes, clever, beautiful, popular, who fell out of a window to her death. The death has been accepted as suicide; Kayla had even left a suicide note. But Kayla’s father isn’t prepared to accept this, and he had asked Jack to look into Kayla’s death. The local police are not convinced about the suicide verdict either. So, Lee agrees to spend some time residing in the school, effectively undercover as a temporary teacher. Jack uses his influence to get the school’s Board of Governors to agree to this; after all, if there is anything untoward about Kayla’s death, they would like to be the first to know.

Once installed in Berkshire School, Lee does indeed start to discover all sorts of facts about Kayla, her life as well as her death, and in particular, there is a pornographic video of Kayla. But was she the victim of pornographic activity or the victimiser?  It would appear that Kayla’s friend Jocelyn knows more about this than she lets on. Then Ethan Horscroft, another pupil at Berkshire, goes missing and is later found drowned in the icy waters of the local lake. Maybe his kayak capsized butin that case, where is it? And in the end who is the most determined to avert scandal from overwhelming the prestigious school?

Although a suspicious death set in an exclusive boarding school may seem to be a classic English Home Counties type cosy mystery, we are reminded that much of Canada is a wilderness and always close at hand are bears who raid rubbish bins. Cars slow down to allow a mother bear and cubs to cross the road. And on the ice-covered surface of a lake the remains of a caribou torn to piece by wolves can be seen.
------
Reviewer: Radmila May
To read a review of the second book in the series No Return, click on the title.

Jay Forman was once a relatively sane television producer. Since walking away from the cameras she’s been crazy busy adding mother and mystery author to her list of credits. Her focus is now locked on sending Canadian travel writer Lee Smith and Jack Hughes (Lee’s best friend with many benefits, not least of which is that he’s a billionaire philanthropist) to wherever bodies are found.