‘Under Violent Skies’ by Judi Daykin 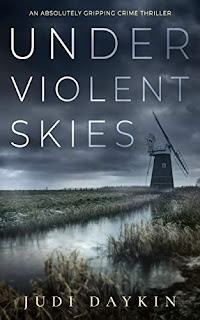 DS Sara Hirst is about to start a new job in Norfolk. She is anxious to discover what had become of her father who abandoned her mother and herself when she was a toddler - her mother has always refused to explain why he left.  A few old letters he wrote to her mother, the last one with a Norwich postmark, are the only connections Sara has with him.

Sara has hardly got her foot through the door of the serious Crime Unit at Norfolk Police’s headquarters in Wymondham when a body is found in a ditch at East Ingham near Happisburgh. The body is that of an ex-cop, identified as DS Adam Crane who it turns out was Sara’s father. He has been strangled. DI Edwards, and constables Ellie James and Mike Bowen help Sara investigate the death. They learn that, after retiring for health reasons, DS Crane had become an advisor on farm security, and compiled reports on thefts from farms for the NFU.  During the course of this work, he noticed that many thefts from farms occurred when crop pickers were around. He had also become suspicious of the activities of a couple of locals Des Dixon and Ray Fraser, and of their association with one of the gang masters and his immigrant crew of crop pickers.

Adam Crane’s body was found on Agnes Richardson’s land.  Agnes is 70. She lives on her own and she begins to fear for her safety. Her farmhouse, land and outbuildings abut Des Dixon’s land, and she regrets allowing him and some of the immigrants to use her outbuildings to do up old cars. Two girls are held virtual prisoners in caravans on Des Dixon’s land. One, Lenka, cooks and cleans for the crop pickers, whilst the other, Mouse, is there to service the men.

There are several threads to this grim story: Sara’s search for her father and the investigation into his death; the mystery of why her mother won’t tell Sara why her father left; why Agnes’ son has stopped replying to her phone calls, and the fate and the treatment of the two illegal immigrant female slaves.   Gratuitous violence, and racism are never far away as fear, hatred, and resentment towards immigrants – and police sergeants from London who have no local knowledge - stalk the pages. These threads are woven into a complex web that builds slowly before it picks up pace towards the end when most of the threads are neatly tied up.

I admired the way the uneasy co-existence of Norfolk folk, holiday homers and hard-working immigrant workers who are separated from their families and mistrusted by many, seeps through the writing in Under Violent Skies. I also found the story refreshing because, as far as I was concerned, the who- and the why done-it strands often seemed subservient to some of the other threads. I couldn’t understand why the prologue gave so much away, but other than that, I thoroughly enjoyed the book and thought it made an excellent read.
-------
Reviewer Angela Crowther

Judi Daykin  was born in Yorkshire.  She has lived, worked and made theatre in Norfolk for the last forty years. She completed her MA in Creative Writing (Crime Fiction) at the University of East Anglia (UEA), and her debut novel was shortlisted for the Little, Brown UEA writer's prize in 2019. Judi is also a working actor, and also runs her own theatre company, Broad Horizons, specialising in commissioning new plays recovering and retelling women's stories.  She says since Joffe Books offered to publish her novel, she now has the writing bug, who knows how many more there will be.'

Angela Crowther  is a retired scientist.  She has published many scientific papers but, as yet no crime fiction.  In her spare time Angela belongs to a Handbell Ringing group, goes country dancing and enjoys listening to music, particularly the operas of Verdi and Wagner.