‘Vengeance at Aulis’ by Peter Tonkin 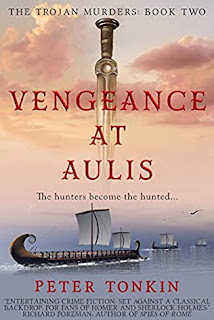 In this novel Peter Tonkin continues the adventures of his partly-sighted and crippled anonymous young rhapsode (or bard), who is the narrator, and his master, King Odysseus of Ithaca. You may remember that in Beware of Greeks, the first novel of the Trojan Murder Mystery Series, Odysseus and the rhapsode travel to the city of Phthia in Northern Greece to win the support of Peleus, King of Thessaly, for the expedition that the High King Agamemnon is mounting against the city of Troy. The ostensible purpose of this expedition is to recover the beautiful Helen, wife to King Menelaus of Sparta but abducted by the Trojan prince Paris. Agamemnon’s real motives, of course, are profit and self-aggrandisement. On the journey to Phthia, and subsequently to the island of Skyros, the rhapsode learns many things, such as the devious and ruthless nature of Greek power politics, the lengths to which Peleus’s queen, Thetis, will go to save her son Achilles, the greatest warrior of his age, from the death that awaits him at Troy, and, most importantly, the basic skills of detection imparted to him by the sleuth king Odysseus. However, he also discovers that someone has it in for rhapsodes.

In Vengeance at Aulis his experiences are not that dissimilar. The action has shifted to the port city of Aulis, where the Greek fleet of 1,000 ships is waiting to carry 50,000 men from all parts of Greece to attack Troy. The problem is that the fleet is becalmed and cannot sail, and the men are becoming restless, even mutinous. A young priestess of Artemis is killed, along with a stag sacred to the goddess, in the temple grounds. The High Priestess Karpathia, outraged, requests Odysseus to discover the murderer, which eventually he does, not before other deaths occur, including that of a rhapsode, which is ominous for the narrator. Through her oracle, the goddess has demanded that the murderer pay a price: the sacrifice of a child!

Odysseus, with his adept young apprentice, must use all his powers of diplomacy and detection to negotiate his path through plots and counter-plots, needing to cope with the hostility and mutual antipathy between Agamemnon and Karpathia, between the High King and his brother Menelaus, and, last but not least, between Agamemnon and his beautiful queen, Clytemnestra, who arrives suddenly with her even more beautiful daughter, Iphigenia, whom she fully expects to marry the glamorous Prince Achilles.

This preliminary to the Trojan War, as students of Euripides and Racine will know, does not end well. Odysseus is indeed an attractive character ― highly intelligent, humane, a natural leader trusted by his men, a sceptic and rationalist in an age of superstition. Apart from the intricate and ingenious plotting, I enjoyed the descriptive passages evoking the wild beauty of the Greek landscape. One criticism I have, which will put off only the most pedantic reader, is that the proof-reading could have been more thorough. There are several errors and inconsistencies in punctuation and spelling. For example, Palamedes, one of the more unattractive minor characters, is at one point spelt Palimedes.  But this book  is a splendid read and we look forward to its successors in the series.
------
Reviewer: Ranald Barnicot 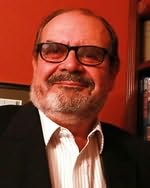 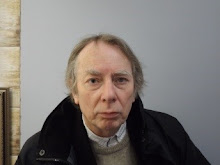 Ranald Barnicot is a retired teacher of EFL/ESOL who has worked in Spain, Portugal, Italy and the UK.  He has a BA in Classics from Balliol College, Oxford, and an MA in Applied Linguistics from Birkbeck College, London. While at Oxford, he acted (as the chorus leader!) in a Classical Society production of Sophocles’ Oedipus Tyrannos. His main activity now is as poet and poetic translator. A Greek Verse for Ophelia, and other poems by Giovanni Quessep (Out-spoken Press, 2018), co-translated from Spanish with Felipe Botero Quintana, came out in November 2018. By Me, Through Me, original poems and translations, was published by Alba Publishing in December of the same year. Friendship, Love, Abuse etc The shorter Poems of Catullus (Dempsey and Windle) was published in July 2020.