‘River of Sins’ by Sarah Hawkswood 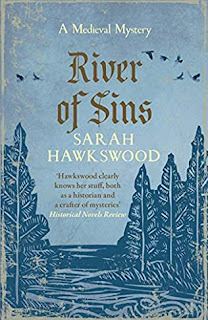 Police procedurals set in the twelfth century sounds like a contradiction in terms, but that’s exactly what the Bradecote and Catchpoll series is. Hugh Bradecote, lord undersheriff of Worcester, equates to the perceptive detective inspector who commands respect from everyone, high and low. Bluff, grizzled Serjeant Catchpoll is exactly as his job title suggests: the trusty, experienced sergeant with the common touch. There’s even a green young DC in the shape of Walkelin, Catchpoll’s apprentice.

If River of Sins is any criterion, the series is meticulously researched historical fiction as well as the well-crafted crime variety. Everything rings true, from the everyday details such as food and clothing to the period dialogue which is never less than crystal clear; in the best tradition of the genre, whether or not it is accurate (and who can possibly know for sure?), it feels right and strikes all the right notes.

A woman’s body is found close to the river outside the city, hacked around in what appears to have been a frenzied attack. She is identified as Ricolde, the finest whore in Worcester, respected by many despite her dubious profession. Bradecote and Catchpoll set out to find the murderer but meet with barriers at every turn.

Suspect after suspect is found and eliminated as the doughty pair and the willing but naïve apprentice delve into Ricolde’s distressing past and surprising present. They discover a woman who raised herself out of a childhood marked by neglect and violence to become proud, generous and the best at what she did: the equivalent of a high-class escort rather than a street-corner tart.

There’s a whole cast of skilfully drawn characters set against the equally clear-cut and colourful background: women who are sharp-tongued, abused or warm-hearted; men who are gentle, violent or arrogant (I especially enjoyed Simon Furnaux, castellan of Worcester Castle and undeserving of his high opinion of himself) – all with their equivalents in modern society, proving that though technology may advance, people don’t change much.

Eventually, of course, the murderer is identified and hunted down in a madcap chase on horseback, foot and river, though not until after there are more deaths and Bradecote himself barely escapes from mortal danger. The killer gets his comeuppance, and it all ends happily, not only for our heroes but also for a few other people.

Even without the intriguing parallels to modern-day policing, River of Sins is a cracking good murder mystery. And if your tastes incline more towards history than murder, there’s plenty of that too.
------
Reviewer: Lynne Patrick

Sarah Hawkswood  read Modern History at Oxford University and specialised in Military History and Theory of War. She turned from writing military history to mediaeval murder mysteries set in the turmoil of The Anarchy in the mid 12thC, all set in Worcestershire, where she now lives. The Bradecote & Catchpoll series began with Servant of Death (previously published as The Lord Bishop's Clerk) set in Pershore Abbey. The second, Ordeal by Fire, is set in Worcester itself, and there are already another five written. Writing is intrinsic to who she is, and she claims she gets 'grumpy' when there is not another manuscript on the go. Her aim is to create a 'world', one in which the reader can become immersed, and with an accurate historical context, not 'dressing up'. Sarah Hawkswood is a pen name.