‘In the Shadow of an Old’ Master by P J Blake 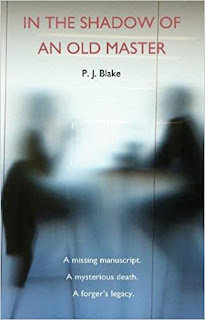 
Eric Hargrave, the ‘King of art forgers’ is found wounded and unconscious with a head wound on a street in Rome.  He is taken to hospital, where he dies, and Alberto Conti, an inspector for the Commissariato of Trastevere takes charge of the investigation into what may or may not have been an accident.

Hargrave’s brother, Bernard, inherits his estate and discovers that a number of people are interested in what Eric has left behind and in trying to find work that he was supposed to be doing for them.  The disappearance of a manuscript the forger was writing seems to be a matter of particular concern.  However, neither these concerns nor those of his superior officers deflect Conti from his inquiries, during which he meets Guilia Vasari, a friend of Eric’s.  He is happy to involve her in the investigation because of her knowledge and interest and, as time passes, because of their developing friendship.

Set in the world of fine art, with its attendant criminal possibilities, this story gives a nod to real life (the mystery surrounding the death of Eric Hebborn, a talented forger, and its aftermath).  The plot moves along at a good pace; Guilia’s frequent trips between London and Rome and her (perhaps unlikely) relationship with Conti provide the opportunity for descriptions of Italian life which add local colour.  The characters who frequent the galleries, museums and auction houses - academics, dealers, publishers, collectors and curators (as well as the actual artists and forgers) - all have their parts to play in the unfolding story.

Ultimately the ending may not be quite as strong as the rest of the story, but altogether it is a book that holds the readers interest.
------
Reviewer: Jo Hesslewood

P.J. Blake was born in Paris but spent most of his life outside France. He has spent the last 35 years with his wife and two children in Denmark, Hong Kong, Italy, England, Greece and Germany and draws inspiration from the colourful characters he has met and the different cultures he has experienced. In the Shadow of an Old Master is his first published novel.

Jo Hesslewood  Crime fiction has been my favourite reading material since as a teenager I first spotted Agatha Christie on the library bookshelves.  For twenty-five years the commute to and from London provided plenty of reading time.  I am fortunate to live in Cambridge, where my local crime fiction book club, Crimecrackers, meets at Heffers Bookshop .  I enjoy attending crime fiction events and currently organise events for the Margery Allingham Society.