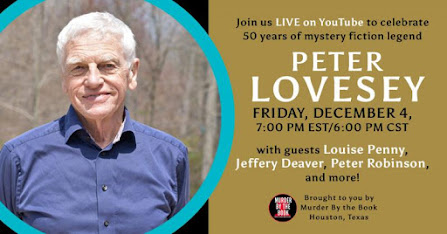 2020 marks the 50th anniversary of the publication of
Wobble to Death,
Peter Lovesey's debut mystery.
Join Murder by the Book and Soho Press in celebrating the Golden Anniversary of the Diamond Dagger Winner and MWA Grand Master with a virtual gala.

Attendees who preorder or purchase a signed copy of the limited edition 50th anniversary hardcover of Wobble to Death will receive an exclusive printed collectible program for the gala.

Most of our events can be watched live on the Murder By The Book YouTube page, which can be found Here.

When it’s time for the event to begin, you should be able to refresh the page until the live video shows up as a new post. Or, if you've subscribed to our channel you'll get a notification when we go live.

If you miss the beginning of the talk, as soon as it wraps up you can find it on our
YOUTUBE CHANNEL to watch from the beginning.

Of course, the timing is crucial. In Houston, the home of Murder by the Book, it will be 6pm. On the eastern side of the United States, 7pm. On the west, 4pm. And I must remember to be awake at midnight, UK time. But fear not, English fans. You will be able to re-run the event on Youtube later.

The book that launched my mystery writing career fifty years ago was Wobble to Death, which has now been reissued by Soho Press in a special signed collector’s edition. Last weekend Tom Nolan wrote in the Wall Street Journal:

“Remarkably, the still productive Peter Lovesey’s mystery-writing career has stretched a decade longer then the seemingly eternal Simenon’s. Mr Lovesey’s first book, Wobble to Death (Soho Crime, 274 pages $25), celebrates its 50th anniversary this year with a gilt-trimmed collector’s edition that includes a foreword by Jeffery Deaver, who notes that, even as a beginner, ‘Lovesey writes . . . with the skill of an illusionist.’ Set in the London of 1879, Wobble to Death finds police Sgt. Cribb stalking a murderer over the course of a six-day speed-walking race. The Mystery Writers of America named this book one of the 100 best mysteries of all time; half a century later, the magic holds up.”

Still productive? It’s true. I’m glad to report that the twentieth novel in the Peter Diamond series will be published by Soho Crime in the US and Sphere in the UK in the summer of 2021. That really is as much as I can tell you.

Thanks for your interest and support. Let’s look forward to a happier, less stressful new year for us all.
Peter 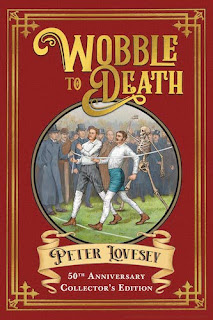