‘The Girl Before’ by J.P. Delaney 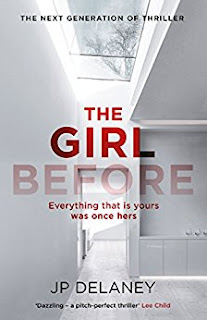 
A minimalist, hi-tech house in London proves to be more a protagonist than a setting in J.P. Delaney’s, The Girl Before.

Emma and Jane are unknown to each other;  at the beginning of the novel their lives are connected only by the fact that they have both suffered traumatic experiences.  Their stories are revealed through parallel narratives as they struggle to forget the past and make fresh starts free from the memories that haunt them.  Cue Edward Monkton, handsome, enigmatic and the architect of “One Folegate Street”, a house that appears to offer sanctuary within its intelligent, uncluttered walls.  Edward, and the home he has designed, intrigue and attract the two women but will the house and its creator really provide them with the new beginnings they long for and who is The Girl Before?

The crisp style of this short novel precisely scaffolds and connects the two distinct plots.  The carefully crafted tale leads to a sudden and surprising ending that lingers in the mind long after the book has been put down.
------
Reviewer: Dorothy Marshall-Gent

J P Delaney read English at Oxford University and then to work as an advertising copywriter. He lives near Oxford.