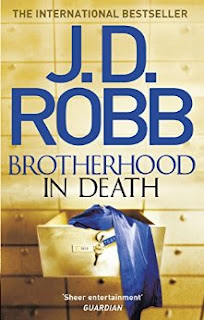 
J D Robb fans will be delighted to know, if they don’t already, that the sizzling In Death series now numbers forty-two, with a forty-third on the stocks for later this year.

J D is at her breathcatching best when the crime under investigation by ace New York cop Lieutenant Eve Dallas stirs up memories of her own damaged past. In Brotherhood in Death, both Eve and the reader find themselves conflicted, as they are reminded that the protagonist isn’t necessarily the most guilty person, and murder is sometimes not so much a heinous crime as... well, read it and you’ll find out for yourself.

The case starts out pretty close to home, if by home we mean people we love and respect. Dr Charlotte Mira, the police department’s psychologist and profiler, has long since stood as a mother-figure for Eve, and her deliciously absent-minded husband Dennis is set fair to do duty as the caring dad our heroine never had. When Dennis is attacked following his discovery of his injured cousin, it’s to Eve that the usually unflappable Dr Mira turns.

The first twist is that when Dennis regained consciousness his cousin had disappeared – but that’s just the tip of a horrifying iceberg. The grotesque sequence of events which follows stirs up Eve’s old nightmares, which naturally makes her all the more determined to ensure justice is done, with the help of the familiar supporting cast: Eve’s gloriously gorgeous billionaire husband Roarke, her partner Peabody (who has shed a few unwanted pounds at last!), geek detectives Feeney and McNab, investigative journalist Nadine Furst, and an increasingly well-defined team of cops and associates (Jenkinson’s colourful ties are becoming a feature!). J D Robb’s many fans know how it all works, complete with mid-21st century technological advances and the kind of nerve-tingling sex between Eve and Roarke which we lesser mortals only dream of.

A scattering of domestic and personal touches include Dennis Mira’s sublime hot chocolate, Eve’s loathing of air travel and Roarke’s attempts to shoehorn vegetables into Eve’s diet. Peabody supplies plenty of humorous moments, especially with her largely imaginary weight issues. There are plenty of sharply-drawn one-off or occasional characters. And of course justice is finally served, this time in more ways than one.

Some titles in J D Robb’s sometimes hair-raising, always highly readable In Death novels are a little more complex, a little more original than others – inevitable when a series runs this long. Brotherhood is up there with the best.
------
Reviewer: Lynne Patrick

J D Robb. With a phenomenal career full of bestsellers, Nora Roberts was ready for a new writing challenge. A pseudonym offered her the opportunity to reach a new and different group of readers. The first futuristic suspense J. D. Robb book, Naked in Death, was published in paperback in 1995, and readers were immediately drawn to Eve Dallas, a tough cop with a dark past, and her even more mysterious love interest, Roarke. The In Death books are perpetual bestsellers, and frequently share the bestseller list with other Nora Roberts novels. J. D. Robb publishes two hardcover In Death books per year, with the occasional stand-alone original In Death story featured in an anthology. Forty Two books later, there is no end in sight for the ever-popular In Death series.