‘A Death in the Family’ by Michael Stanley 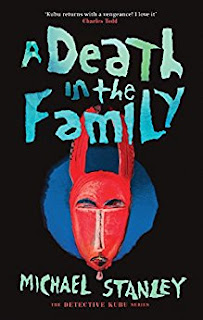 This is the fifth title in the Botswana-set series featuring Assistant Superintendent David ‘Kubu’ Bengu. This time the victim is Kubu’s own father who was shot in the street at night. He had told Kubu’s mother that he was going to meet someone but he is elderly and rather confused and no-one can be sure whether that was really so. Kubu’s boss, Jacob Mabaku, tells Kubu that because the victim was his father he cannot be involved in the investigation which will be handled by Detective Samantha Khama instead. However, Kubu is determined to find out whatever he can. But almost immediately he is directed to look into the apparent suicide in his car of the civil servant Goodman Kunene, the assistant director of the Botswana Department of Mines. Then it appears that Kunene did not commit suicide but was murdered. He too had arranged a meeting with an unknown someone that night. And forensic examination of Goodman’s car has produced one piece of evidence: a single hair, not African, probably Asian. Goodman’s friend, the American mining engineer and consultant Peter Newsom, is attacked and beaten up; however, Kubu suspects that Newsom is not just a simple mining engineer.

Meanwhile, the nearby village of Shoshong is in turmoil over proposals to extend a local mine; some support it because it will bring jobs to the village; others are against because they suspect that, although land will be taken and houses demolished, the jobs will not materialise. Meetings are called and one turns into a riot in which the village chief, Rankoromane Koma, and several others are killed. And unknown to everyone else, the chief’s son Julius has been meeting secretly with a Chinese mining firm. Julius is a suspect for his father’s death and Kubu discovers that there is a link between that and his own father’s death and that Chinese involvement is a factor.

Michael Stanley is in fact, two writers, Michael Sears and Stanley Trollip. In my review of his previous title, Deadly Harvest, I described Kubu as a remarkably attractive protagonist; he is no less so in this book. At the same time the authors have tackled two dark subjects, the all-pervasive corruption, and the effect of Chinese ambitions to exploit the country’s natural resources without employing local people as has, the authors tell us, happened in Namibia and parts of Botswana. And there is both a list of characters with a guide to pronouncing names and a glossary – very useful and instructive. Very much recommended.
------
Reviewer: Radmila May