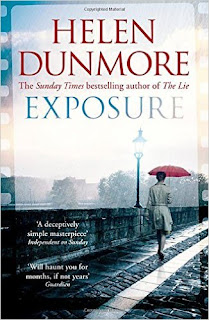 1960, the height of the Cold War, and Britain is gripped by spy paranoia with numerous espionage rings being unmasked and more suspected. But Simon and Lily Callington feel secure in their little terrace house in London’s Muswell Hill. Simon has an undemanding job at the Ministry of Defence, found for him by his old Cambridge friend, Giles Holloway, also at the Ministry of Defence while Lily is a part-time teacher. It is she who focuses on building a home for Simon and herself and their three adored children, Paul, Sally and Bridget. And for her and Simon it is a refuge from their darker past: for Simon against his unhappy childhood, unloved by his upper-class parents, bullied by his older brothers and at school; for Lily, against even darker fears for as a child she was not Lily but Lili, a Jewish child in pre-World War II Berlin. Although she and her mother escaped to Britain the inescapable fear that all Jews felt has become a part of her against which her home is a bulwark. And Giles too has a secret refuge: his dilapidated squalid flat in Finsbury Park in North London.

However, Simon has another past which he thought was behind him. As a young Cambridge undergraduate he was seduced by the rather older Giles, then rather exciting and glamorous although now a tired old alcoholic with his best years behind him. But Giles has an even darker secret: he has been spying for the Soviet Union for years now, inveigled into doing so by the sinister and manipulative Julian Clowde, also at the Ministry of Defence albeit in a senior position. Once he did so from conviction, now he enjoys the secrecy of sneaking files of documents out of the Ministry and taking them to his flat where he photographs them and then passing the films to clandestine contacts and taking the originals back to the Ministry. He enjoys the feeling of importance that this gives him but it is his undoing for one evening he slips on the stairs and breaks his leg badly while the files are on his desk in his flat. All he can do is urgently contact Simon and ask him to return the file which the unsuspecting Simon agrees to do: unsuspecting that is, until he opens the file and sees just what these documents are. And then a terrifying sequence of events commences which reveals just how eggshell-fragile a refuge is Simon and Lily’s home and how vulnerable they and the children are. But Lily, in defence of her family, can be ruthless when she has to be.

I thought this book was outstanding and an excellent example of how the increased stature of crime and thriller fiction has led to a breaking down of the divide between literary and crime writers. The story line is very simple: no subplots and a minimum of characters. The writer therefore has enough room to enlarge about how Lily and Simon’s early life has shaped their characters and influences the actions that they take. Trains and train whistles have an important symbolism: for Simon they remind him of his unhappy childhood but for his son Paul, who is fascinated by trains, they symbolise his hopes for the future, while for Lily with the horrifying connection between trains and the fate of European Jewry they arouse the deepest of fears. I was reminded too of a song of the period, popularised by the folk trio Peter, Paul and Mary, ‘I can hear the whistle blow’, where the singer laments that he is leaving his home for ever. Another important symbol is Giles’s deteriorating condition in hospital, his physical decay echoing his moral decay. Very highly recommended.
------
Reviewer: Radmila May

Helen Dunmore was born in Yorkshire in 1952.   She won the first Orange Prize for Fiction (now the Baileys Prize) for her novel A Spell of Winter.  She wrote about the Siege of Leningrad in her 2001 novel The Siege, which was described by the historian Antony Beevor as 'a world-class novel'. It been translated into more than twenty languages.  Her 2014 novel The Lie focusses on the trauma of the First World War and its aftermath through a group of three characters who come of age during that war. The Lie was a Sunday Times bestseller. She is also a poet, short story and children's writer.  Her 'Ingo' series of novels for children has been published around the world.  Helen's new novel is Exposure. Set against a backdrop of the Cold War, spies and scandal, it tells the story of a woman's struggle to protect her family at all costs.
Author photo: Caroline Forbes