‘Jonathan Dark, or the Evidence of Ghosts’ by A.K. Benedict 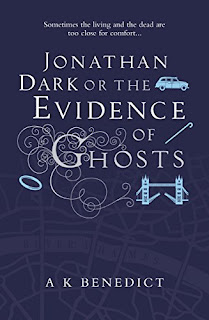 We, the living, share our world with the dead, or rather with their ghosts. That is the premise of this strange, surreal, chilling and remarkably effective novel.

It begins with a man whose name is Finnegan Finch who is running for his life. He had got in with some very dodgy customers linked to a shadowy inter-generational net of powerful people connected to authority known as The Ring. Frank had wanted Out. Big mistake. Then we switch to an unnamed man who is looking through stacks of photographs for shots of a girl called Maria King. After that we move to Maria herself: born blind, she has recently had an operation to restore her sight. But now she doesn't want her sight and wears a blindfold even for her favourite hobby of mudlarking (prospecting the foreshore of London's Thames for what she can find ranging from present-day litter to a Mesolithic stone tool). Maria, despite her disability, is independent and resourceful but when she finds a metal box on the foreshore with in it a human hand wearing a diamond ring and on the lid a message in Braille saying 'Marry Me Maria' the police become involved. Leading the squad is Detective Inspector Jonathan Dark; he is haunted by his previous failure to uncover the stalker of another woman, Tanya, who had been sent a similar box with a slightly different message: 'Marry Me Tanya'. Tanya had been killed and this failure weighs on Jonathan: he is determined to find the stalker before Maria suffers the same fate. But the stalker has unparallelled access to the internet and to secret information; he can spy on Maria's every move; she knows it and so do the police; but how does he do so and who is he?

Meanwhile Jonathan, after the collapse of his marriage, has moved. His next-door neighbour is Frank, big, burly, kind . . . and (believe it or not) an undertaker. Frank seems very ordinary but he has one attribute: he can see ghosts. One is his beloved wife Barbara who died some years ago but whose ghost he keeps ever near him despite the efforts of more malign spirits to take even that from him. But most of his ghostly contacts are with the recently dead whom he attempts to comfort and reassure. One such is Finnegan Finch who did not escape his pursuers and whose body was recently plucked from the Thames and cremated at the crematorium he ran with his wife Rosa and son Michael; now he wants reassurance that the same fate that befell him will not befall them. And there is a link between Finnegan's death and cremation, and the rings sent to Tanya and Maria: they are made from cremains (cremated remains): 'Turn your loved one's ashes into diamonds' says the (real life) advertisement. And these rings are the insignia of The Ring. With Frank's help Jonathan Dark can now also see ghosts but although the ghosts can see the dangers surrounding Jonathan and Maria what can they do protect them from the dead, and, even more dangerous, the living?

If you can suspend disbelief sufficiently as I did this is an enthralling and chilling read enhanced by the author's modern yet lyrical prose style and narrative technique and her vivid imagination. Appropriately enough, I read this book and wrote this review in the run-up to Halloween. I was rather puzzled by Maria's insistence on wearing a blindfold until I realised it was a symbol for the way in which we blind ourselves not so much as to the existence of ghosts as to the intrusive and all-pervasive surveillance powers of those in authority. Perhaps we should all bear this in mind. Highly recommended.
------
Reviewer: Radmila May

A K Benedict  was born in 1979. She read English at Cambridge and studied creative writing at Sussex. She now composes film and television soundtracks, as well as performing as a musician. She lives in Hastings and writes in a room filled with teapots and the severed head of a ventriloquist’s dummy