Robert B Parker’s ‘The Devil Wins’ by Reed Farrel Coleman 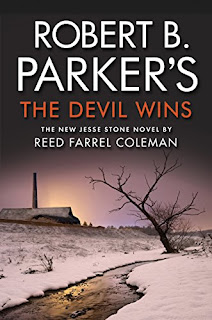 I discovered the late Robert B Parker back in 1986, when Spenser Private Eye arrived on our TV screens. The detective, played by the brilliant Robert Urich was a huge hit and cemented Parker’s reputation as one of the greats of the hard-boiled PI genre. Parker set his stories in Boston, and the city he loved became a major character in his books. He wrote forty Spenser novels, another six featuring his lady private eye Sunny Randall and then the Jesse Stone series, set in the fictional small town of Paradise, on the coast north of Boston.

After a disintegrating marriage ramps up Jesse Stone’s drinking, he is fired by the Los Angeles Police Department. With nowhere to go but down, to his amazement he is hired by the Paradise Town council as their new Police Chief. A place that on the surface appears to be a quiet New England community, but swiftly proves to be a crucible of trouble.

Parker died in 2010 and left substantial boots to fill, but Jesse Stone lives on in new novels authorised by the Parker Estate; initially written by Michael Brandman and currently by Reed Farrel Coleman - author of the New York set Moe Prager private eye series. Brandman’s Jesse Stone is more melancholic than the original, something I rather warmed to.  Farrel Coleman’s version is less introspective, but then he is writing a Jesse Stone who has been in Paradise for a decade.  He sums him up with characteristically lean prose…
“Jesse always took life in his stride, sometimes with an assist from Johnnie Walker. He had never been the type of man to go round and round with himself.  Never been a man to second guess or waste too much energy on regret.”

However, Jesse is having to question more than he wants to in The Devil Wins.  Just when he has decided he has a handle on his work in Paradise and knows the town well.

After a violent storm, three bodies are found in the wreckage of an abandoned factory building. One, a man’s body wrapped in a tarpaulin, is barely hours old.  But alongside him, are the remains of two teenage girls who disappeared during a July 4th celebration twenty-five years earlier. That’s a long time ago, and the situation isn’t helped when Jesse learns that Officer Molly Crane – his right hand – was a close friend of both girls. Then the investigation becomes more complicated when the mother of one of the dead girls returns to Paradise to bury her daughter and is killed a day later. Jesse has to dig deep into a past he knows nothing about. A past which the small town would prefer to stay buried.

Not an original plot idea, but Farrel Coleman handles the storyline effortlessly. It’s a while before he allows us to enjoy spending time with Parker’s associate characters - Dix the ex-cop turned shrink; Luther ‘Suitcase’ Simpson, the officer nicknamed by Jesse after one of his baseball heroes; his ex-wife Jenn who he has taken a decade to get over; and Molly Crane his close friend and sounding board.  But when he does, Parker is back with us and Farrel Coleman’s writing soars, his prose boiled to perfection. There is a sentence which will stay with me for a long time - at the moment when Jesse and Molly accept the realities of the town’s past…
“She smiled a heart-breaking smile as sad as a June day is long”.
I look forward to Reed Farrel Coleman getting inside Jesse Stone’s skin once again.
------
Reviewer: Jeff Dowson

Robert B. Parker was the author of seventy books, including the legendary Spenser detective series, the Jesse Stone series, and the Virgil Cole/Everett Hitch Westerns. Winner of the Mystery Writers of America Grand Master Award and long considered the undisputed dean of American crime fiction, he died in January 2010. 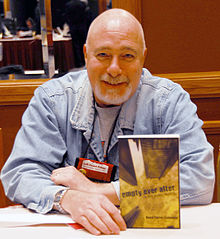 Reed Farrel Coleman was born 29 March 1956. He has been called a hard-boiled poet by NPR s Maureen Corrigan and the noir poet laureate in The Huffington Post. He has published twenty-three novels, including nine books in the critically acclaimed Moe Prager series, and most recently, Where It Hurts. He is a three-time recipient of the Shamus Award for Best Detective Novel of the Year, a winner of the Barry and Anthony Awards, and is a two-time Edgar Award nominee. Coleman lives with his family on Long Island."
http://reedcoleman.com/