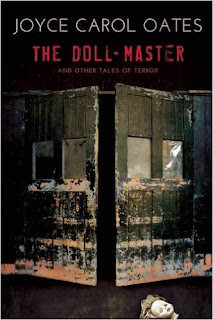 The U.S writer Joyce Carol Oates is a leading light in the literary establishment. She has written over 70 books and her reputation stands high. However, although I knew her name I had never read anything by her before. This collection of six stories, long as short stories go, more like novellas, was a revelation.

In The Doll-Master the narrator, Robbie, describes how as a small child his even younger cousin Amy let him play with her doll. When Amy dies of leukaemia Robbie consoles himself by taking her doll. This sets a pattern; over the years, instructed by his Friend whom he knows although he is invisible to everyone else, he takes dolls from other children but it does not stop at dolls, little girls go missing too, more and more over the years . . .

In Soldier the narrator, Brendan Schrank, a young white man, is awaiting trial for the unprovoked murder by shooting of a young black man. He has in fact already been tried but the jury failed to agree so there will have to be a second trial and he is now out of prison on bail He has been told not to read his emails because of the threats that have been made. However, he does so and finds that to certain sections of the U.S people he has become a hero and it is they who have been sending him sufficient money to guarantee the substantial amount of bail set by the judge at the first trial. His defence at the trial had been that he had encountered a group of young black men who had first taunted him and then set upon him with a view to robbing him and, fearing for his life, he had fired at the most aggressive one with a gun that had belonged to his uncle a former police officer. This is the story that has appealed to those members of the public who have supported him and which he himself now believes. But as he continues to recount what he says happened, it becomes more and more clear that the reverse is the case.

In Gun Accident a young girl, Hanna, has been asked by her favourite teacher to look after the teacher’s house and feed the cat while she is away. Hanna is delighted to do so but when her cousin Travis and his friend arrive at the house the dream turns to a nightmare. Travis, but not the friend, breaks into the house, helps himself to whatever he can find, then finds a gun and uses it to torment Hanna physically and sexually. But in the mayhem, demented by fear, Hanna shoots Travis and then blames the friend. However, the police cannot find him and gradually the case is shelved. But, 26 years later, when Hanna returns to the town she encounters the friend. And he recognises her.

In Equatorial Audrey and her husband Henry are on holiday in South America, a trip which involves a visit to the Galapagos. Audrey, who is her husband’s third wife, becomes gradually convinced that he wants to jettison her in favour of a possible fourth wife, that being the pattern of his other marriages. But not through divorce, simply by disposing of her in some way. But is she paranoid or is there truth in her fears?

In Big Momma, Violet who with her neglectful mother has moved to a new town and, for Violet, a new school. Violet is miserable and lonely, teased at school for being small and fat, without friends until Rita Mae Clovis, pretty, smart, popular, picks out Violet to be her new best friend. Rita Mae’s father and the other Clovis kids welcome Violet and she often visits their isolated farmhouse unknown to Violet’s mother who would have forbidden her daughter to go there. But the farmhouse hides a secret, one that is connected with the disappearance of pets such as cats, dogs, even small children, a secret that is both dreadful and truly terrifying.

In the last tale, Mystery Inc., the narrator, who calls himself Charles Brockden, arrives at a crime fiction bookshop (there are plenty of those in the U.S.) in a remote New England seaside resort run by one Aaron Neuhaus. The narrator quickly ingratiates himself with Neuhaus as a fellow bibliophile; in fact, however, the narrator already owns a number of crime fiction bookshops in other towns which he has acquired by the simple method of poisoning their owners and buying from the heirs. This bookshop is highly desirable and the narrator can’t wait to make it his own. But Neuhaus is several steps ahead of the narrator.

Joyce Carol Oates is a recipient of the National Medal of Humanities, the National Book Critics Circle Ivan Sandrof Lifetime Achievement Award, and the National Book Award. She has written some of the most enduring fiction of our time, including the national best sellers We Were the Mulvaneys, Blonde, and The Falls. She is the Roger S. Berlind Distinguished Professor of the Humanities at Princeton University, and is the editor of New Jersey Noir.