‘Apothecary Melchior and the Ghost of Rataskaevu Street’ by Indrek Hargla 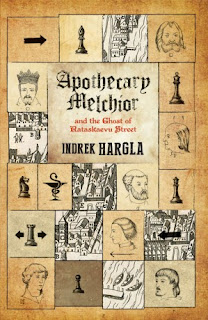 Tallinn, 1419. Now capital of Estonia but then rich and independent, part of the Hanseatic League of independent cities in and around the Baltic and North Seas of north-eastern Europe whose prosperity results from the immense growth of trade in the region. The walled city is governed by a Town Council consisting of the most prosperous merchants although the Dominican order of friars is also of great influence. Relations between the two organisation are mostly good and both are prepared to accept, with reservations, the establishment of a convent dedicated to the Swedish Saint Bridget by the Teutonic Order of Knights, an organisation both monastic and military.

The apothecary Melchior Wakenstede with a house and shop on Rataskaevu Street is a respected citizen of Tallinn whose remedies for ailments have made him many friends while he also has a reputation for searching out miscreants and bringing them to justice. One of those friends is the town's chief magistrate Wentzel Dorn, and it is he who brings the news to Melchior that Tobias Grote, Master of one of the towers forming part of the city walls, has fallen to his death. But earlier that day Grote had come to Melchior's shop and had seen something which had really frightened him near a house on Rataskaevu Street, a house reputed to be haunted by people who had died there many years before. Was it a ghost? Grote was undoubtedly drunk at the time of his death but Melchior, when he views the body, is not satisfied that is the whole story. His enquiries lead him to other deaths on Rataskaevu Street, that of the prostitute Magdalena who had insisted that she had seen a ghost and that of a Flemish portrait painter who had also stated that he had seen a ghost and, moreover, the ghost had asked for God's mercy. Then the body of a young man, half-starved and dreadfully mutilated, is found outside Melchior's own house. Is there a link between those deaths, the apparent ghost, and the death of the powerful and pious old merchant Laurentz Bruys?

This book, by Estonia's leading crime writer, needs to be read slowly and carefully. The history of the region is complex and fluid particularly in the mediaeval period and the most powerful states, Sweden, Poland, Prussia, Lithuania, were often in conflict. There is a quite full introduction where various events of the time are referred to and which form the historical basis of the novel but not all of these are explained, like the Victuals Brothers and the Teutonic Knights; luckily there is enough information in Wikipedia to cast light into this, for UK readers, little-known area of history. And there is also a fair amount of information in the novel which is interesting such as the way in which ancient folk traditions and superstitions continued while at the same time the population was devoutly Catholic. And Melchior's remedies are reminiscent of those of Ellis Peters's Brother Cadfael but some also require ingredients not for the squeamish, all no doubt very authentic. And so, I suspect, are the descriptions of mediaeval criminal procedure: evidence obtained under torture, savage penalties meted out, even the frequent death penalty inflicted in the most cruel and barbaric ways imaginable. All a long way away from the European Convention on Human Rights!

This book will be of particular interest to those interested in history, especially what are to U.K. readers but of course not at all to inhabitants of the Baltic States, the subject's obscurer corners. And, given the current situation in Eastern Europe, perhaps to all of us.
------
Reviewer: Radmila May

Indrek Hargla was born 12 July 1970 in Tallinn, Estonia.  He is is one of the most prolific and bestselling Estonian authors working today, mostly in the fields of science fiction, fantasy and crime. He is best known internationally for his Apothecary Melchior series, which now runs to six volumes with film adaptations currently in preparation.