‘Faith and Beauty’ by Jane Thynne 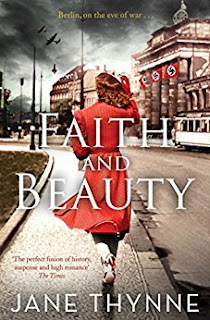 Berlin 1938. The city is jubilantly celebrating Hitler's birthday. But at the same time there are those in Berlin who lead double lives. One of those is the film actress Clara Vine, half-English and half-German. Because she is a film star she has been taken up by some of the wives of the Nazi elite who gossip interminably, particularly Magda, wife of Joseph Goebbels, Propaganda Minister in the Hitler government and one of the dictator's most fanatical supporters. (Being befriended by Magda Goebbels is not dissimilar to being befriended by a poisonous black tarantula!) What no-one suspects is that Clara has also been recruited by British Intelligence to report back on all the gossip she picks up. British Intelligence is especially interested in anything confirming the rumours that Germany and Russia are about to enter into a non-aggression pact. And Clara has a secret even more dangerous to herself; her German mother was actually Jewish and Clara's identification papers are forgeries.

Meanwhile the body of Lotte Franke from the Faith and Beauty Society which trains suitably Aryan young women to be wives of the Nazi elite has been found in a shallow grave in woods outside Berlin. (The Society really existed; I thought it sounded too absurd to be true but online research showed that that was not the case.) The murder is dismissed as the act of a maniac but Lotte's friend and fellow student Hedwig Holz knows that there was something more: Lotte had a secret lover. And she had hinted at a major secret. Clara had known Lotte and felt that the intelligent, independent-minded girl was not committed to life as a Nazi bride. But Clara has her own troubles: Magda Goebbels has murmured that there are people within the Nazi ranks who are suspicious of Clara. Is Magda's warning genuine or is she activated by malice? And what is the role of the handsome SS officer Konrad Adler? Is he just an Aryan automaton? Or is he something else? What was Lotte Franke's secret and did it lead to her death? And, for Clara above all, what has happened to Clara's lover, the British Intelligence officer Leo Quinn who had recruited her into undercover work? Is he, as she has been told, dead? Or is that yet another lie?

I heard Jane Thynne speaking at an event in Chiswick Library on September 19th. She was one of four writers who had set books in Germany before, during and after World War II. And I discovered she is the wife of the writer Philip Kerr whose Bernie Gunther novels, some of which have been reviewed in Mystery People, cover that period although I can't pretend to have read them all. Jane Thynne has used extensively the diaries of various Nazi wives particularly that of Magda Goebbels. It seems that the marriages of the various Nazi leaders were tumultuous to a degree and the leaders themselves loathed each other almost as much as their wives loathed their husbands, their husbands' mistresses and each other. For me this was a real eye-opener as was just how delusional was the myth of Aryan racial superiority and the extraordinarily ridiculous lengths to which the so-called scholars of the time were prepared to go to support it. The myth was ludicrous, leading to the proposition that Tibetans and Mongols were really Aryan and that the builders of the Inca and Mayan temples were descended from Aryan tribes who settled in South and Central America a million years ago! One might laugh except that the consequences for Jews, gypsies and other groups deemed sub-human were so terrible. Today, of course, thanks to scientific research, we know that human evolution is a far longer, far more complex and infinitely more interesting story.

I was also struck by a fundamental difference between the two writers albeit that they share a home and family. Far be it from me to suggest that all male writers write in one way, and women writers write in another way. They don't; nor should they. But in the Bernie Gunther novels Bernie has a number of relationships none of which ultimately work out and I suspect he doesn't really try. He is essentially a cynical, wisecracking loner. However, although Clara is also the protagonist who features in Jane Thynne's novels, her attitude to her lover Leo and his to her are quite different; her love for him is intense and profound and one senses that his love for her is the same, whatever the truth about his apparent disappearance.  As for what happens to them both that will have to wait for more novels in the series. The same is true of Hedwig, Lotte's friend, and her Polish-origin beloved Jochen, active in the Rote Kapelle anti-Nazi movement: will they survive the horrors of World War II? I rather liked Hedwig: essentially innocent and lacking in self-confidence and, although supporting the Nazi ideology - after all in the totalitarian state it was all she knew – yet aware that something was very wrong and prepared in the end to follow her conscience and do what was right.

I was deeply impressed with this book, both the gripping story and the research which went into it. I shall look for the previous Clara Vine novels – Black Roses, The Winter Garden, A War of Flowers – and await eagerly the next in the series, Solitaire.
------
Reviewer: Radmila May

Jane Thynne was born in Venezuela and educated in London. She graduated from Oxford University with a degree in English and joined the BBC as a journalist. She has also worked at The Sunday Times, The Daily Telegraph and The Independent, as well as for numerous British magazines. She appears as a broadcaster on Radio 4. Jane is married to the writer Philip Kerr. They have three children and live in London. Find out more at www.janethynne.com connect with her on Facebook or follow her on Twitter @janethynne