‘The Last Alibi’ by David Ellis 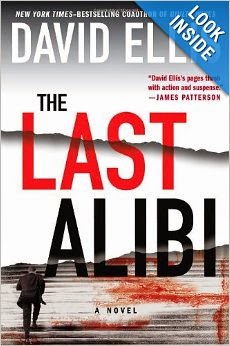 This is another novel featuring defence lawyer Jason Kolarich. This time Jason himself is on trial for murder but of whom is deliberately not made clear until towards the end of the book. He is being represented by his law partner Shauna Tasker. The novel switches between the trial in the present and the past, six months earlier, when a young man called James Drinker sought Jason’s advice because he feared he was being framed for several serial murders. But as Jason investigates it becomes clear that nothing about Drinker is as it seems. Drinker is manipulating Jason for his own ends - but what are those ends? Jason is becoming increasingly uneasy about Drinker but the attorney-client relationship means that he has to keep his unease to himself. Moreover, Jason’s own problems - an increasing dependence on pain-killing medication for a serious sports injury affecting his personality about which no-one knows - are making more and more difficult for him to carry on working. Shauna is horrified at what is happening to Jason and places much of the blame on the beautiful yet manipulative court reporter Alexa Himmel with whom Jason is becoming increasingly but dangerously involved. Events proceed inexorably to a compelling and dramatic climax.

The novel’s complex narrative structure, admirably controlled by the author, makes it difficult to give much detail as to the plot. It is, however, well worth reading. For details as to the author and some of his previous titles see the review of The Wrong Man.
-------
Reviewer: Radmila May

David Ellis  is a lawyer and award-winning author of nine novels. Dave currently lives near Chicago with his wife Susan, their children Abigail, Julia, and Jonathan, and their pug, Otis.

http://davidellis.com
Posted by Lizzie at 18:54