‘The Black Life’ by Paul Johnston 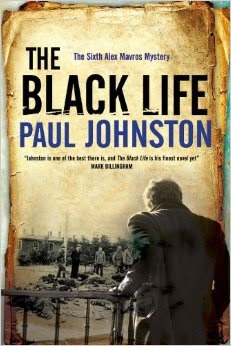 Alex Mavros is a Scottish Greek making a living as an investigator specialising in missing persons.  He is asked to follow up a sighting of someone who was supposed to have been executed during the war.  A chance glimpse in a Greek street throws Alex into a case which has its roots in the Nazi occupation and the extermination of Jewish families.  This is woven in with some of the complexities of the subsequent communist politics and infighting at the end of the war.

The client’s daughter is following his investigation closely and seems to have her own secrets and ghosts.  Along with all this, Alex is trying to keep one step ahead of a killer who is after him and his family, overspill from a previous case.

This is the sixth of the Alex Mavros mysteries and over the series Paul Johnston has made the character darker.  In this story, coupled with some of the sinister circumstances which still haunt recent Greek history, the darker side is revealed even more, further exploring some of the dubious characters who Alex works with and for.

The fast paced narrative takes you through a tough story and some of the interesting history which dogged Europe during the second world war.  Whilst Alex is uncovering dark family secrets, he is also struggling with an emotional situation on the home front, which gives the plot more depth and some more “normal” moments.

Gripping and engaging and, as expected, with a sting in the tale.
------
Reviewer: Amanda Brown

Paul Johnston was born in Edinburgh, Scotland, in 1957. His father Ronald was a successful thriller writer. Paul attended state primary school in Berwickshire and private schools in Edinburgh. He subsequently studied ancient and modern Greek at the University of Oxford, then added an M.Phil in comparative literature to his M.A.. After leaving Oxford in 1982, Paul worked for shipping companies in London and Belgium. He moved to Greece in 1987, working on a newspaper, in shipping and then teaching English. He started writing seriously in 1989 when he went to live on the small Aegean island of Antiparos. Paul returned to Edinburgh to do another master's degree in 1995 and then started studying for a doctorate. Paul remarried in 2005. His wife Roula is a Greek civil servant. Their daughter Maggie was born in Athens in January 2006 and their son Alexander in January 2008. Paul has come through (touch wood) two unconnected bouts of cancer in the last five years and underwent chemotherapy until November 2008. That hasn't stopped him from writing or from studying for a PhD in creative writing. He still divides his time between Scotland and Greece – having left Athens, he and his family now live in the beautiful seaside town of Nafplio in the Peloponnese. Paul had a third bout of cancer in 2012 (as well as the writing gene, he has one that increases the chances of him being hit by otherwise unconnected cancers), but he has recovered. He has finally completed his PhD and graduated in June 2014. He is currently working on Heads or Hearts, the sixth novel in the Quint Dalrymple series.
http://www.paul-johnston.co.uk
Posted by Lizzie at 10:27